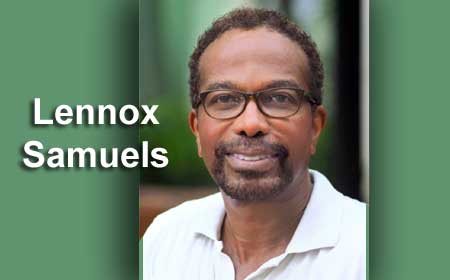 “I think the government of Belize, whatever the party, should set up a kind of expatriate department in some ministry whose sole job is to identify, track down, and stay in touch with these people (Belizeans abroad), so that even if they don’t end up repatriating to Belize, you get the benefits of their expertise. You make it so that they contribute to the country.”

When you are persistent and patient there are many credible things that come your way. This awesome story about a renaissance man named Lennox Samuels who hails from Belizean shores was intended to be written some thirty years ago. And through the kind patronage of some very good friends, it has finally come to view and to you, the Belizean Legends audience.

Early in my migration from Belize to the Windy City of Chicago, Illinois in the United States in 1981, one of my brothers had introduced me to a Belizean brother, Calvin Flowers, studying medicine at the University of Chicago. It was an opportunity of a lifetime that was given to me in concern for my educational pursuits since yours truly’s journey had begun as a medical student and later ended up as one in the field of journalism.

Calvin Flowers’ struggle to succeed will require volumes here, and for another time, but he painted for me a portrait of a Belizean colleague who had succeeded spectacularly in the field of journalism and was doing big things already on the American scene. Calvin said Lennox Samuels wrote a story about him called, “Illegal Alien”, after the outstanding journalist had completed a Bachelor’s and Master’s degrees in Journalism at Marquette University. The story thrilled me emotionally as much as the one of Calvin’s iron-man personality that was revealed in front of me as a positive role model of perseverance and tenacity.

Flowers had gone all the way to medical school to become a doctor with an illegal alien immigration status, and his struggle is like one that parallels the spirit of a guerrilla movement in the mountains. It was deep and emotionally moving especially when you are seeing it right in front of your eyes. Hanging out with him made me into a man immediately at 19 years old at that time.

But Samuels’ portrait haunted me for a long time, and a few months later in the city of Evanston, Illinois, he surfaced coincidentally through some friends of mine dressed in “GQ” style, rocking a stylish pair of cowboy boots and a pair of designer jeans. He was sharp, a quiet personality, and was telling my friends that he was about to go cover a musical concert by the British rock band, The Police, for a major newspaper he was working for in Chicago.

That blew me away, and I remember immediately introducing myself to him and sharing Calvin’s story. He acknowledged it without a doubt, and asked how his friend was doing. Since that time, it would not have been possible for me to see Lennox Samuels again until Tuesday, January 10, 2017, as we spoke in front of the camera at the Belizean Legends studios in Los Angeles, California about his life as an incredible cosmic personality that was lived rather than preached.

Samuels’ story of hard work, perseverance and triumph will touch any Belizean soul whose dream it is to be all that he or she can be as an immigrant to a strange land. It is a story of black immigration that unfolds through the personality of a brilliant internationalist of Belizean stock. One that summarizes all the struggles against a vicious white supremacist system that throws all its weight against a black man who had automatically picked up two strikes against him being black and immigrant. If Samuels had allowed himself to be broken, this story would not have been told.

He is Belizean Legends’ renaissance man for 2017. He is a pride of Belize and a world-class journalist who has visited so many countries around the world while being published hundreds of times in many major newspapers in the U.S. and across the world. He carried his Belizean heritage with him in one of the most phenomenal ways that is ever imagined, and his accomplishments as a world class mass communications scholar will grab you to the point of asking: how could anyone from that little jungle called Belize accomplish such daring feats.

But yes, Lennox Samuels did!