Belizean super-striker not home yet for practice – another “sick FFB joke?” 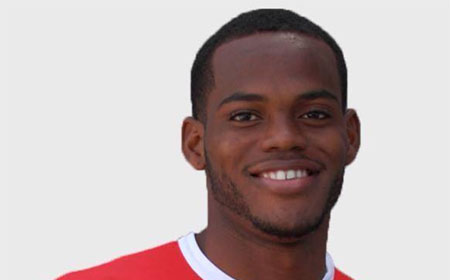 BELIZE CITY—The Football Federation of Belize (FFB) continues to reel following its most recent debacle, which cost the Belmopan Bandits, the Premier League of Belize (PLB) Champions, their golden opportunity to represent the country at one of the most prestigious football competitions in the region.

With Belize’s Champions League tournament hopes dashed, the men’s National A-Level football selection is now scheduled to compete in the UNCAF tournament which will take place in the United States next month; however, Belize’s star player and goleador, Deon McCaulay, who is currently playing for the US-based Atlanta Silverbacks, is yet to arrive in the country for training, since he is apparently caught up in the FFB’s tangled web of financial turmoil.

Today, Amandala spoke to McCaulay’s father, former superstar semi-pro footballer, David “Manu” McCaulay, who told us that while Deon has done his part and straightened out his hectic schedule with the North American Soccer League (NASL) team, he is anxiously waiting for the FFB to buy the plane ticket for him to return home to commence training with the Belize National Football Team.

David said, “His team already gave him permission to come, but he’s waiting on the ticket.”

At his press conference last Wednesday, August 13, embattled FFB president, Ruperto Vicente, promised that Deon McCaulay should have reached Belize by today, August 18; however, when his father looked into the situation last night, he was told that the ticket would instead be bought by tomorrow, August 19.

The father told us that Deon had even personally spoken to Vicente, who pledged to have the ticket ready for the superstar by today, but at present, nothing has been done, since the FFB president is out of the country, and Deon has already missed his first scheduled day of training.

David McCaulay believes that it might have something to do with outstanding payments that the FFB owes Deon from the last national team outing last year.

He said, “The General Secretary assured me that the FFB is going to pay for the ticket, but I want to hit on another subject, which is Deon’s money. When I spoke to Mr. Vicente, he told me that he used the money to buy a ticket for Deon to try out [for the Atlanta Silverbacks], when all the other players collected their money, so I don’t see how that can be compensation for his [Deon’s] travel expenses. The money was supposed to [be] paid from the Gold Cup.”

David McCaulay described the situation as “very confusing”, and said that Deon is “very annoyed” because he wants to know why the Federation is taking so long to bring him home, when he is “waiting, packed and ready to go”.

The veteran said that he hopes that the FFB “gets their act together and start doing the right thing for footballers in the country.”

In the meanwhile, unconfirmed reports are that Bandits owner, Hon. John Saldivar, a sitting Cabinet Minister, was appointed as National Team Coordinator, which can be considered a risky move in light of FIFA’s stern rules pertaining to the involvement of government officials in the affairs of FIFA-sponsored events, such as the CONCACAF Champions League tournament and the UNCAF Games.

At press time tonight, we understand that the FFB is holding a meeting to address the pressing issues within the Federation.

Belize is scheduled to play in the upcoming UNCAF games against Honduras on September 3, against Guatemala on September 7, and against El Salvador on September 10.

Chapter 32 Things had calmed down during the first part of the following year, with Gertrude’s forced absence from all extra-curricular activity, and the seeming...
Read more
- Advertisment -