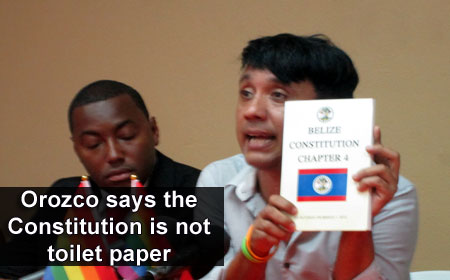 Whereas the LGBT community was jubilant over Benjamin’s decision to effectively decriminalize homosexuality, the churches, which joined the case as interested parties, expressed their outrage.

“This is huge for me!” said Caleb Orozco, former executive president of the United Belize Advocacy Movement (UNIBAM), who was the sole claimant in the case after UNIBAM was removed by the court for lack of standing to bring the constitutional challenge.

“I’m the facey b—— that bothered to challenge the status quo in our society and managed to get a response that was meaningful,” Orozco told the media at a press conference after the ruling.

“None of us are free until all of us are free. And make no mistake about it! The ruling today was just the first step. It continues. The struggle continues. All of us have to be in a position of being able to enjoy our rights—whether it be Belizeans with incapacity and whether it be transgender Belizeans,” said Orozco’s attorney, Lisa Shoman, SC.

The religious community says that the LGBT community will also push for the legalization of same-sex marriages. 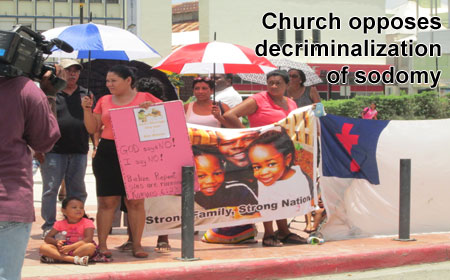 When the case was first lodged at the Supreme Court, then Solicitor General, Oscar Ramjeet, swore an affidavit saying that, “…the section under challenge was enacted for the protection of public morality and the preservation of the moral fabric of the people of Belize… for public policy reasons, the section under challenge should not be changed or altered, since this may have a negative impact on Belizean society as a whole.”

Lewis said that Belize has already had several problems this year, storms of different types, and that going against the Word of God will bring destruction.

Orozco and his LGBT community are not convinced, however, and suggest that they will continue to struggle for the mainstreaming of LGBT status, including same-sex marriages.

“If my community wants to fight for gay marriage, we now know they have every right to go to court and litigate the issue,” Orozco told reporters.

Standing opposed is Pedro Villanueva, Corozal Baptist Church, who was among the protesters gathered in front of the Supreme Court this morning. He now believes the Constitution, which claims to acknowledge the supremacy of God, is useless, and goes on to echo the sentiment that “Belize will be punished.”

Kevin Forrester, a Christian youth activist, was in court when the judge read the ruling.

“Nobody was stopping them from doing what they want in their house. My contention is future endeavors to bring this behavior into the public arena, on the streets, in our educational system,” Forrester said.

Although the question of legalizing sodomy has sparked fiery debate on the issue of public morality, Benjamin told those gathered to hear his ruling on Wednesday that “the court stands aloof of adjudicating on any moral issue…” and it “cannot act upon the prevailing majority view.” He said that the court is the guardian of the Belize Constitution, and it “cannot shirk from its responsibility” by saying the matter has to be left to the Legislative arm of Government.

Attorneys for the church had said that UNIBAM should lobby the National Assembly to have the law changed, not go to the court. 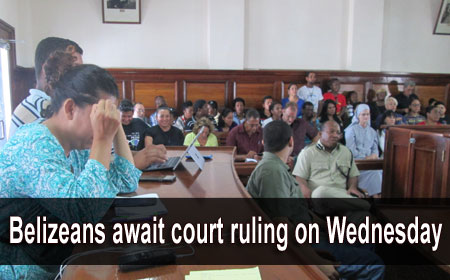 The controversy has been over Section 53 of Belize’s Criminal Code, a law dating back 126 years, to 1888, when the British enacted similar provisions across the English-speaking Caribbean, which was Christianized. The chief holy book, upon which witnesses are still asked to swear in the courts, is the Christian Bible—the same book which says, in Leviticus 18:22: ‘And do not lie with a male as with a woman, it is an abomination.”

The British once burned or buried sodomites alive, but they later mitigated the penalties to the extent where sodomy has been decriminalized today, although several other Caribbean jurisdictions retain buggery laws, including Guyana and Antigua, of which the Chief Justice is a dual national. In Guyana, a conviction for buggery results in a life sentence; in Antigua, one could be sentenced to prison for 15 years. In Belize, the provision of Section 53 of the Criminal Code calls for a prison term of 10 years.

Benjamin today “read down” Belize’s law, adding the following: “this section shall not apply to consensual sex acts between adults in private.”

Benjamin was ruling on a case filed by Caleb Orozco in 2010. Orozco claimed that the sodomy law violates his constitutional rights to privacy and human dignity. The hearing concluded in 2013, and it took Benjamin three years to finally hand down the decision, in Orozco’s favor.

Benjamin then went on to establish that the court does have the power to alter the existing law. He said that Section 53 violates Orozco’s right to privacy. He also said that the part of the Constitution which forbids discrimination based on “sex,” also includes one’s “sexual orientation,” since Belize had acceded to the International Covenant on Civil and Political Rights, years after the UN Commission on Human Rights ruled that sex also includes sexual orientation. (See story on how the meaning of “sex” was changed, elsewhere in this edition of Amandala.)

Benjamin said that Belize, which signed back in 1996, “tacitly embraced” the interpretation given by the UN organ when it accepted the international covenant.

Westmin James, SC, Lecturer in Law at the University of the West Indies Cave Hill Campus, who supported Orozco’s challenge, said at the press conference that international law can be used by the court to help interpret domestic law, based on state obligations. He said that if there are two meanings, the court will adopt the meaning that is consistent with the state’s international obligations—which is what Benjamin did in interpreting the application of “sex” in Belize’s constitution.

Shoman told reporters that, “One of the most cutting-edge things to come out of the decision is the interpretation of the word ‘sex…’” 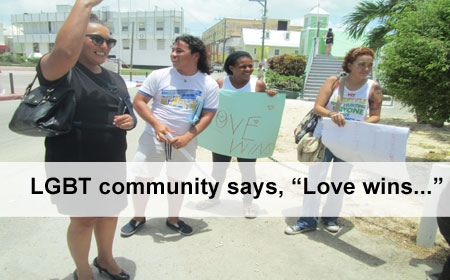 She said that under section 16.3, people are no longer allowed to discriminate against anyone on the basis of their sexual orientation.

“The Chief Justice expressed in his decision the view that ‘sex’ also includes ‘sexual orientation;’ this will affect most likely the transgender community,” said Shoman, pointing to more legal challenges that will come down the road.

The interpretation of the CJ, she said, has “very far-reaching and wide-ranging” application, which “will give rise to a lot of interesting questions in the weeks, months and years ahead.”

The churches had complained that an alien world view of sexual orientation was being forced on the people of Belize.

Patrick Menzies, who has stood publicly opposed to changes to Belize’s gender policy, told reporters that section 53 is only one of many laws that will be changed because of the gender policy. He said that a particular school in Santa Elena is already switching male gender to female gender. He showed us a screenshot of a poster which had the word “witch” under the male gender and “wizard” under the female gender.

“Belize is still a democracy… and we can demand that our senior leadership of this government retract this law,” Menzies said.

The legal drafting was done by Michelle Daley, the ex-wife of LGBT activist Maurice Tomlinson, the Jamaican who also launched a challenge to Belize’s Immigration Act, which he claimed violated his right to hassle-free movement in CARICOM. The Caribbean Court of Justice recently dismissed Tomlinson’s case against Belize and Trinidad and Tobago.

Buggery laws exist likewise in Trinidad, as they do in Jamaica, Grenada, St. Lucia, St. Vincent and most other CARICOM jurisdictions.

Orozco’s case was assisted by the University of the West Indies Rights Advocacy Project (U-RAP) – which is also helping four LGBT persons challenge the cross-dressing laws in Guyana, where the case has reached the Court of Appeal.

It is not known whether the CCJ will eventually have to pronounce on the test cases. Today, Orozco challenged the Barrow administration not to appeal the CJ’s ruling. The Government has not indicated whether it will.

Opposition Leader Johnny Briceño told Amandala, in response to the ruling: “We are a country governed by laws and the Supreme Court has passed a judgment and we need to respect that judgment. Why should they appeal? Even if they appeal they will lose…” He expressed confidence that the Opposition People’s United Party will accept the decision of the court.

The Government of Belize must also pay Orozco’s court costs, the court ruled.