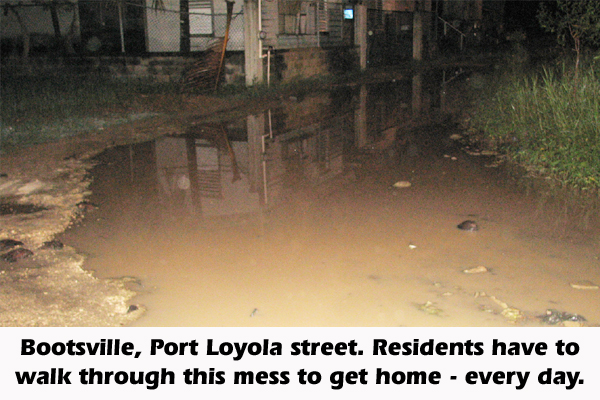 Cañeros have described road conditions in northern Belize as “very deplorable;” but the problem plaguing them is evidently a microcosm of a much bigger national problem. A very wet rainy season has brought plenty of torrential rains in the recent weeks – rains which have worsened the national road network and rendered many roads unusable.

Cane farmers said that when they complained to Deputy Prime Minister Gaspar Vega about their road difficulties, he indicated to them that it is a countrywide problem.

We understand that some drivers in rural Belize, as well as in urban centers, won’t drive on certain streets and roads because they fear getting stuck. Others have had to reverse out of streets which have potholes so huge, you can’t get pass them unless you’re driving a large vehicle or a truck.

During the recent rains, it had also been reported that some buses in northern Belize lost their engines due to severe flooding, and many commuters were left stranded.

Minister of State in the Ministry of Works and Transport, Edmund Castro, told Amandala today that Minister of Works, Rene Montero, and Vega met with Prime Minister Dean Barrow last Wednesday to discuss the transport problem.

When we contacted Works CEO, Errol Gentle, we were told that he was unable to speak with us at the time, but we were further advised that the Prime Minister is expected to address the issue at a press conference on Wednesday.

Castro said that the Belize River Valley area is still battling to recover from the effects of flooding in the area, and he said that for the rest of the year, they will have water in most areas. The livestock are being seriously impacted by the adverse effects of the floods, he said.

The Belize Rural North area representative said that they are getting assistance from the National Emergency Organization (NEMO), the Ministry of Agriculture and the Ministry of Works.

This evening, the Belize Press Office issued a notice saying that the Prime Minister will hold a press conference at 10:00 a.m. on Wednesday, November 27, to discuss relief to Belizeans in response to rain and flood damage.

Belize City Councilor in charge of works, Dean Samuels, told us that the rains this year were worse than any year he can remember.

Many of the streets of the Commercial Capital, Belize City, which has a heavy concentration of traffic, are now marred with mammoth potholes. The Belize City Council has been using temporary fill after the rains; however, as soon as the next bout of rains pours, the fill is washed out, re-creating, and in some cases, even widening the potholes.

Samuels acknowledges that what is being done currently is “a quick fix” and that at the end of the day, if the rains come again, they will be “back to square one.”

Today, after the weekend rains, some of the potholes which were filled only last week, were being filled again.

The Councilor said that it is like they are throwing good money away, but the temporary fill provides relief.

The Belize City Council is nearing the end of its program to concrete 100 streets. Belize City has over 500 streets, and the Belize City Council has only a few more streets to go before it meets its quota. Streets that are to receive concrete surfacing are East Collet Canal, Douglas Jones Street, Eve Street and Gabourel Lane, Baymen Avenue and Vernon Street. Partial works have been done on some of these streets. Samuels said that the final contract has been sent out for bidding and the last 3 or 4 streets should be completed by the end of this year.

So what about the remaining streets? CitCo recently announced that it will rehabilitate 17 more streets.

Asked what will be done about the remaining 300 and odd streets in the City, Samuels said that “the rehabilitation will be ongoing…”

However, there is currently no plan in place for the remaining streets.

The Racoon Street Extension area is among the worst streets in Belize City, but Councilor Samuels notes that this is listed among 17 top-priority streets which the Belize City Council plans to rehabilitate. Culverts will also be added to improve drainage, he said.

The 17 earthen streets in dire need are located in Lake I, Collet, Queen’s Square, Port Loyola, and Belama, and the budget may run about $700,000. The rehab will bring the streets up to chip and seal or tar level, but they won’t be paved from this budget, the Councilor said.

Other streets include Cannondale, Balan and Gladden Streets in Lake I; Pitter Street, Antelope Street Extension and George Frazer Street in Collet; and Jack Fruit Crescent in Belama. They hope to get started on those 17 streets in a week or two, Samuels said.

We understand that some road works, such as Jane Usher Boulevard and South Creek Road, were done under the Southside Rejuvenation Projects through the Ministry of Works.

According to Samuels, the City Engineer is working on a final budget, following an assessment done last week. He said that he and the Mayor plan to discuss the rehabilitation proposal when they meet tomorrow.