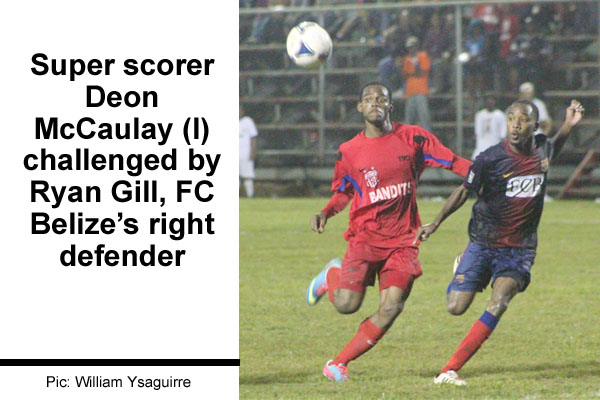 A large crowd turned out at the FFB Stadium in Belmopan on Saturday night, February 8, for the decisive Finals Game 2 of the Premier League of Belize (PLB) Belikin Cup Opening Season 2013-2014 tournament. A tough match-up was anticipated between home standing Belmopan Bandits FC and visiting FC Belize, after they drew 1-1 in the Finals Game 1 at the MCC a week earlier. And the game was close and competitive even after the Bandits claimed a 2-1 lead at the end of first half; but second half was all Bandits, after FC Belize lost defender Mark Grant to a red card ejection, and it ended 5-1, with Man of the Match, Deon McCaulay (37’, 67’ PK, 69’, 71’) netting 4 goals (including a penalty) and Denmark Casey, Jr. (45’) scoring the other for the Bandits. The only FC Belize goal came from Mark Kelo Leslie (39’), briefly tying the score in first half after McCaulay had given the Bandits a 1-nil lead.

In the post-game awards ceremony, Belikin representative Hilly Martinez and FFB President Ruperto Vicente were on hand to assist PLB Commissioner Myito Perdomo in issuing the prizes and trophies to the champion and sub-champion, as well as individual awards which were previously announced for the regular season, and the Playoff MVP award, which was a foregone conclusion.

In a refreshing departure from tradition, this year’s championship team trophies (cups) and individual awards (mounted footballs) were all beautifully carved and polished wooden pieces from Medina’s Furniture Gallery; and the cash prizes were from sponsors Belize Brewing Company (Belikin).

The individual awards for the regular season included a special fan/spectator award, and that went to none other than Aaron Gamboa of Police United FC.