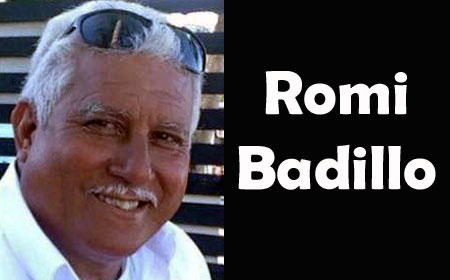 BELIZE CITY, Wed. May 6, 2015–Veteran seaman and boat captain, Romaldo “Romi” Badillo, Sr., 59, of Belize City, who had been fighting for his life at a hospital in Guatemala after he suffered massive burns to about 60 percent of his body, died this morning at the hospital, almost a month after the boat in which he had been travelling exploded.

The sad news of his passing was confirmed by his family this morning.

The grieving family said that they will make further comments on the death and provide other pertinent information at a later date, and declined to say more this morning.

At about 1:00 Holy Thursday afternoon, at “the Hangar” dock near the Belize City Airport, there was an explosion aboard a boat in which Captain Romi, as he was popularly known, and three other men — who were going to Saint George’s Caye to carry supplies for the Easter vacation – were traveling. One of the three men was Stephen Bradley, the owner of the boat, and the other two were Wallace Flowers and George Gonzalez.

The boat engine was started and the boat was about to move away from the dock, when a massive explosion from the engine occurred, and the boat became engulfed in flames. The force of the explosion hurled the three men into the sea, but Captain Romi was thrown forward to the floor of the boat, and in a dazed condition, he caught fire.

Bradley, who was in the water after he had been hurled overboard, got back into the boat when he saw that Captain Romi was on fire, and went to try to help him, but there was a second explosion, hurling Bradley back into the water.

Captain Romi, however, managed to jump overboard, and in that way doused the flames. Bradley said that Romi was badly burned, and he was careful in the manner he held him. He was able to take Captain Romi to another boat that came to the rescue. Romi was taken to the hospital in a critical condition, suffering massive second and third degree burns to the body.

George Gonzalez, who also suffered burns to the body, was admitted to the Karl Heusner Memorial Hospital for treatment, while Wallace Flowers and Stephen Bradley escaped relatively unhurt.

Captain Romi’s family later had him transferred to a burn victim hospital in Guatemala, where doctors tried to save his life, but the cost of the treatment and stay totaled about $200,000 USD.

The family conducted a fundraising event at the Hour Bar at the Newtown Barracks Field on Saturday, April 11, to raise funds, and the event was well-supported by the public. The family said that the public support was really tremendous.

The family reported that the news they were receiving from the hospital had been positive, and they were very optimistic that Captain Romi was going to pull through the ordeal.