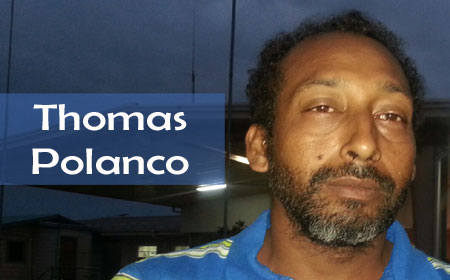 The shocking incident reportedly happened at around 4:30 p.m. that day after both minors had come home from school.

According to police, preliminary investigations have revealed that the boys were playing with each other at the time when the 9-year-old went into his parents’ house and picked up his father’s 16-gauge shotgun.

He then allegedly pointed the weapon through a window at Polanco, who was still outside near the roadside, after which it reportedly went off and five of the pellets hit Polanco — three in the head, one in the nose and one in the cheek.

According to Polanco’s parents, the older boy had been left home alone by his parents who were, respectively, working and grocery shopping in Dangriga Town.

The victim, of the Stann Creek Valley community, who was shot in the head and face, is reportedly brain dead and clinging to life at the KHMH

Last Friday, May 1, Polanco’s father, Thomas Polanco, explained to the media what he knew of the incident.

He said, “They were outside playing with a bird nest in the yard under a palm tree, when, I understand, the older boy told my son, ‘the bird needs to live, too’, and he went inside and got the gun. I was told that he hollered at my son, and when he [Travis] saw the gun, he ran, and the older boy shot him.”

The distressed father mentioned that he is not aware of any quarrel between the two boys while they were playing, and by the time he heard the shot and rushed out of the house, his child had already been shot and was slumped over a garbage drum and experiencing a seizure.

Due to the remoteness of the area where the incident took place, we understand that it took 45 minutes before Polanco’s parents got him to the Southern Regional Hospital in Dangriga, but because of the degree of his injuries, he was later transferred to the Western Regional Hospital in Belmopan, and then to the Karl Heusner Memorial Hospital (KHMH) in Belize City, where he remains in a critical condition, on life support.

“We just have to trust in God and see if he will make it, because he is in a critical condition”, the grieving father said.

While Polanco’s parents declared that they have made a decision to “put it in the hands of God”, his disconsolate mother, Gurly Bahador, charged that even though the boys were good friends, she believes that Travis was deliberately shot by his neighbor.

“I believe it is intentional because he [Travis] was at the roadside near the lamppost and the other child pointed the gun through his window and shot him”, she asserted, adding that the older boy probably gained shooting skills from regularly going on hunting trips with his father.

We were told that police have since questioned the parents of the boy who pulled the trigger, but they have been released from custody.

Polanco’s family said that some of the pellets have since been removed from Polanco’s body; however, he remains hospitalized at the KHMH without any registered improvement.

They are seeking the public’s assistance to cover their medical expenses, and anyone who wishes to offer such assistance can contact them at 625-8128 or 666-7122.

It must be noted that under Belize’s laws, specifically Section 25 of the Criminal Code, as amended by Statutory Instrument Number 36 of 1999, no crime can be committed by any person under nine years of age.

In the case of this accused child, he is covered by subsection 2 of section 25 of the Criminal Code, which states that “nothing is a crime which is done by a person of nine years and less than 12 years of age who has not attained sufficient maturity of understanding to judge of the nature and consequences of his conduct in the matter in respect of which he is accused.”

Dangriga police told us today that the matter has since been turned over to the Social Services Department, which is presently trying to procure a psychiatric evaluation of the 9-year old boy.