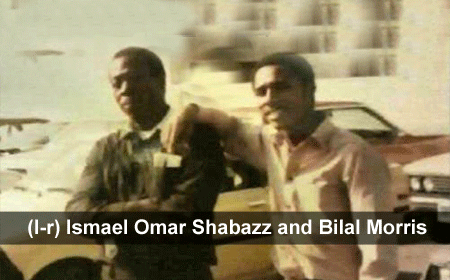 My brother, Nuri Akbar Estrada, pulled this classic from the BREDAA archives and shared with me today in one of the most touching moments about one of the most legendary Belizeans of all time, my brother in faith, struggle and friendship, the late Ismael Omar Shabazz.

As yours truly looked deeply at the historic photo, my mind could not recall where and when it was taken, if it was not for the attached notes by Nuri who reminded me that it was taken in 1984 at the Felix Bilal Islamic Center on the historic Central Boulevard in South Central Los Angeles. The moment was not only historic in terms of this period in my life just two years after my embracing Islam and doing some dynamic work as a Belizean Muslim in the Los Angeles Muslims of Belize (LAMBS), but Central Boulevard in L.A. was an historic entertainment spot where “Angelenos” could hear the best in jazz and see some of the legendary African-American jazz musicians of the 1960s and 70s.

Brother Shabazz, after his migration from Belize and becoming one of the most revolutionary activists in the United Black Association for Development (UBAD), began to share his spirit of activism and Belizean nationalism with both Nuri and myself. It was through Shabazz that all my passion for activism came alive. He wrote the book, and we soaked it up like a sponges. It was only three of us who ended up taking that life-long struggle for freedom, justice and equality for Belize and the Belizean people.

We were a speck among the large African-American Muslim community of South Central Los Angeles, and at Felix Bilal we saw some of the most outstanding African-American Muslim figures, like Imam Warith Deen Muhammad, who was the son of the Honorable Elijah Muhammad of the Nation of Islam. It is there that we met the legendary American Muslim athlete and statesman, Muhammad Ali, and it was where Brother Shabazz hung out at the time doing auto mechanic work for the Muslim community there as he used to do for the UBAD movement in the 1960s and 70s in Belize.

Brother Shabazz had a car that he called, “Black and Proud”, and it was a classic 1940s Chevy that all three of us rode about in L.A. We went everywhere in that car, and Shabazz was a punctual man who would be there to pick you up exactly at the time he said he would. Many a time, yours truly would get in trouble with him for not respecting time. Eventually time management became a very important thing for me after Shabazz was done with me. My heart gets full when reflecting on the many things this legendary Belizean statesman taught me so many years later after my own father migrated out of Belize and pounded those values into me as a boy.

At that time we were publishing a newspaper called, “Belizean Focus”, that can be seen in my hands along with the very popular African-American “Muslim Journal” that replaced what many remembered as “Muhammad Speaks” and “Bilalian News”. We all worked hard in writing, editing and publishing that paper. Shabazz also introduced us for the first time to Sista Lily Nzinga Waite , another UBAD member of the time who assisted us with typing, editing and the layout of the newspaper. She was a Godsend in many ways. And it was Brother Shabazz who first gave me my first manually driven typewriter and where my writing experience began in earnest from the notepad and on to the printed word. He saw the journalist in me and pushed me hard to develop it. He had a passion for hard work and though he was like twenty years our senior, he moved fast and it was difficult to stay with him even in walking.

He taught us to stay in the front of everything since our Belizean culture has most of us shy and always wanting to stay in the back. And he was the street university that we who were also college students would not have necessarily got in a classroom from the best of scholars and learned professors of science and letters. Shabazz, oh Shabazz, you were the best of school.

As this is written, there can be volumes on your work, my dearest brother. But it’s best to stop here now until another time. May Almighty God bless the legacy you left behind and the outstanding goodness and struggle you waged for Islam, the Belizean people, and for your two young brothers and adopted sons at that time, Nuri Akbar and myself, Bilal Morris.

The memory of Ismael Omar Shabazz lives on!

Facebook
Twitter
Pinterest
WhatsApp
Print
Previous articleBogus, not bold: Briceño answers Barrow on 2017 budget
Next articleTHE JOY OF FOOD: HOW MANY MEALS SHOULD WE EAT PER DAY?