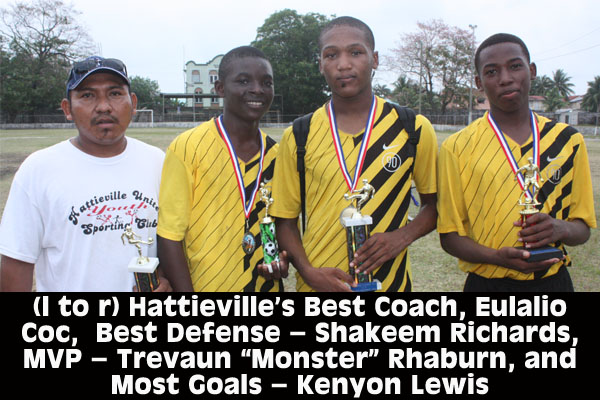 After almost two months of competition, the Belize District Football Association (BDFA) Youth Tournaments climaxed on Saturday, May 3, with the Finals in 3 different categories at the MCC Grounds.

In the U-15 male category, Smart Brown Bombers prevailed, 2-1, over Collet Strikers, with goals from Sherwin Requena and Eldon Byrd, while Shaquil Matute scored for Collet.

The 14-17 female championship saw Academy FC (A Team) coming away with the 3-2 win over Pallotti, with Jody Pott netting 2 and Jennifer Estrada scoring 1 for Academy, while Shandy Vernon and Monisha Hyde got 1 apiece for Pallotti.

In the U-17 male Finals, Hattieville won, 3-1, over City Boys, with Trevaun Rhaburn, Charles James and Kenyon Lewis netting 1 apiece for Hattieville, while Sydney Bradley got the only goal for City Boys. The “man in the middle”, Anthony “Willie Bo” Bernard was under intense pressure in this one, as the City Boys fans were visibly annoyed with his calling back 2 other goals scored by Sydney Bradley of City Boys, while they claimed offside for 2 of Hattieville’s goals. Thankfully, cooler heads prevailed. Both managers of Hattieville and City Boys agreed that championship games need to be administered by only the best certified and experienced referees.

FFB General Secretary Michael Blease was on hand at the post-game award ceremonies, where all players received medals; there were big 1st and 2nd place team trophies, as well as beautiful trophies for individual awards.

Below are the awards issued in the different tournament categores: