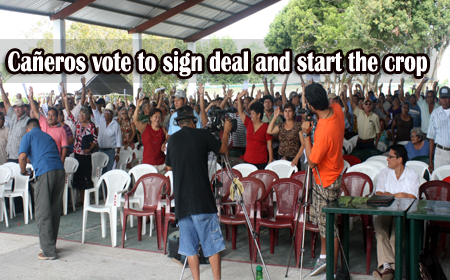 SAN ROMAN, COROZAL–Another in a long series of General Assembly meetings hosted by the embattled Belize Sugar Cane Farmers Association (BSCFA) commenced shortly after 9:00 this morning at the Escuela Secundaria Tecnica Mexico auditorium at Mile 72 on the Philip Goldson Highway, with just over 850 of the association’s 3,000 plus members in attendance.

With a single objective on the agenda, today’s meeting proved to be one of the shortest that has ever been held in recent memory, because no more than twenty minutes after the session got underway, the many distressed cañeros were given the opportunity to either hold their ground, or overturn a previous resolution to have the government-controlled Sugar Industry Control Board (SICB) pronounce the sugarcane crop season open while negotiations between the producers and millers continue under an interim agreement.

As soon as the motion was read to the anxious crowd, an overwhelming majority of the audience, under a strong sense of duress, voted in favor of having their association’s executives sign onto a disputed new commercial purchasing agreement which had been flatly rejected at a similar meeting just two weeks ago, on January 4.

Since that heated event, though, there have been significant changes in the landscape of the beleaguered sugar industry, primarily stemming from the appearance of two new cane farmers associations, both of which have already signed a commercial agreement with the factory owner, Belize Sugar Industries (BSI) and its transnational parent company, American Sugar Refineries (ASR).

As a result, the BSCFA and its general membership – which has recently been slashed by over 2,000 cañeros who broke away to join the new associations – found themselves in a situation where their backs were against the proverbial wall, and when the meeting was over, we spoke to BSCFA Committee of Management (CoM) chairman, Ezequiel Cansino, who seemed much more contented than he had been in the past few weeks.

He told us that since they have overcome that roadblock, the next step is now to inform BSI/ASR of the resolution as soon as possible, so that the signing of the agreement can happen between the two entities by tomorrow, Monday, and hopefully, there can be a long-awaited start to the delayed 2014/2015 sugarcane crop season by month’s end.

Cansino said, “We just came to get an approval from the membership to go ahead and sign the agreement with BSI, and we came straight to the point, and the cane farmers responded as positive as we expected, so we will inform BSI and try to sign [the agreement] by tomorrow.”

The aim for all parties is to have the crop season open by next Monday, January 26, and in the meantime, Cansino mentioned, the BSCFA will be going over its list of members to mark off the particulars of all the cane farmers who have since crossed over to the United Cane Growers Association or the Progressive Sugar Cane Growers Association.

Those farmers, mainly from the Patchakan branch of the BSCFA, reportedly amounted to approximately 42% of the BSCFA membership; nevertheless, Cansino confirmed that a total of 17 branches are still affiliated with the association, 15 of which are fully with the BSCFA, along with 50% of the San Estevan branch, 50% of the Guinea Grass branch, and a handful of farmers from the Patchakan branch who opted to stay.

The BSCFA chairman noted that while he could not conclude that all the cane farmers are happy with the new compromise agreement, the individuals who showed up to the meeting today are the same individuals who had initially accepted the deal in December, and he said that one of the main reasons that there was a change of heart at the last meeting earlier this month was because of a “heavy campaign” by those who were in opposition to the signing.

BSCFA CEO, Oscar Alonzo, who recently returned to the country from vacation, expressed his gratitude for an end to the long-running crisis, albeit under unfavorable circumstances, since there are still a number of individuals from both inside and outside the industry who believe that the farmers are being “pushed around” and definitely getting the short end of the deal.

Alonzo, who happens to be one of those individuals, did not concede that the deal was the best thing for the farmers and the industry, and instead told us that he is of the view that the General Assembly made the decision to sign because it was what was necessary given their difficult financial situations and obligations.

“It is what was necessary; the farmers need to start the crop, and sometimes, in any negotiation process, you win some, you lose some; [however], this is not the final thing. The farmers need to continue to work with BSI, and if we need to retreat a bit to advance further in the future, I think that is something noble and natural, so we know that there are other associations, but we hope that everyone can work together for the future prosperity of the industry”, he told us.

While there may be doubts about the continued existence of the 55-year-old BSCFA considering its recent financial fallbacks, Alonzo maintained that the association is still strong and today’s showing attested that many cañeros still have faith in the BSCFA and its executives.

“The turnout today emphasizes that the BSCFA is not finished. People still have faith and confidence in the organization. It has a track record, marred by difficulties and so on, but members see that there is a future with the BSCFA, and we will see how we can work with Fairtrade, even though some mistakes were made along the way, but this is how you grow and improve, and I believe that the members will help us to be a stronger organization”, explained Alonzo.

The CEO cited that several adjustments will be made in the association to cope with its dire financial constraints, including finding other sources of funding to keep the besieged association afloat.

Of note is that during the meeting, one cañero brought up a motion to have the association get rid of senior officials such as Orange Walk branch chairman Alfredo Ortega; Financial Officer Javier Keme, and others who have vehemently campaigned against the signing of what they have consistently called a “one-sided” agreement; however, that motion was quickly struck down and the meeting was thereafter adjourned.