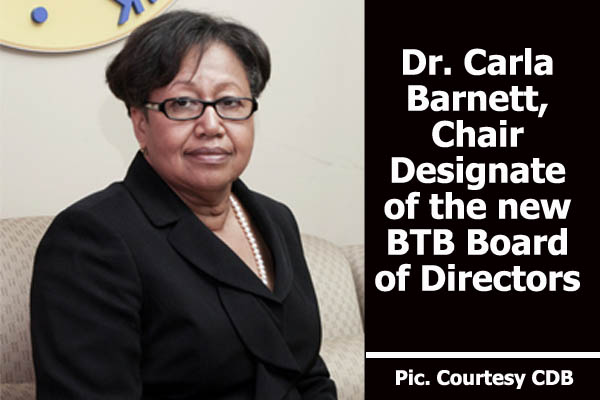 Last month, former telecoms executive Karen Bevans was officially selected as the new Director of Tourism, and today, the Ministry of Tourism announced that a new Board of Directors – to be headed by current vice president of the Caribbean Development Bank (CDB), Dr. Carla Barnett – has been appointed to manage the affairs of the Belize Tourism Board (BTB) for the period 2014-2016.

The newly appointed board is made up of tourism stakeholders representing different sectors of the tourism industry, and according to the Minister of Tourism, Manuel Heredia, Jr., the team is “well-positioned to strengthen the institution and ensure meaningful stakeholder engagement.”

General manager of Ramon’s Village Resort, Einer Gomez, continues to play the role of acting chairman until former Financial Secretary Dr. Barnett – who is presently working in Barbados – assumes the post upon the completion of her contract with the CDB later this year, after which Gomez will remain as vice chairman.

There was an unexpected turn of events at the BTB earlier this year when the previous Tourism Director and daughter of ex-Prime Minister Sir Manuel Esquivel, Laura Esquivel, was removed from office following a vote of no-confidence which was initiated by her managers.

That action prompted the resignation of both of Esquivel’s parents from their government posts in the wake of her firing.