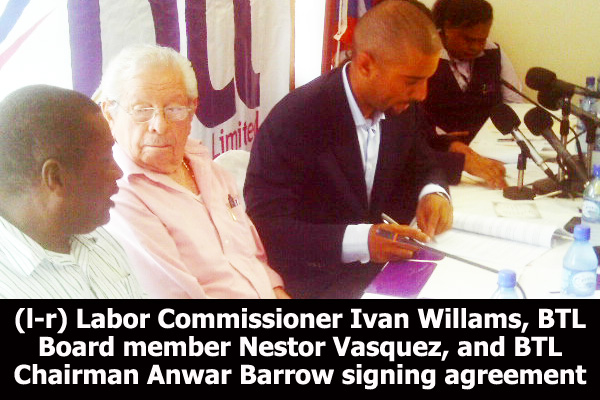 Today, at the Renaissance Towers in Belize City, the executives of telecommunications service provider Belize Telemedia Limited (BTL); the leaders of its workers’ union, the Belize Communication Workers Union (BCWU), and members of the union’s negotiating team sat together and signed a new Collective Bargaining Agreement (CBA) for Telemedia’s employees.

The negotiations, which reportedly commenced last year, concluded earlier this month and led to the first new agreement between the two entities in 15 years, and at the official signing late this afternoon, both sides concurred that negotiations went very smoothly, with minimal agitation.

Recently appointed Chairman of BTL’s Executive Committee, Anwar Barrow, son of Prime Minister Dean Barrow, told the audience that the agreement – which spans up to 2016 – represents a positive step forward for union-management relations.

He referred to the event as a “historic occasion” for the company, since it sets a precedent for a climate of mutual respect between management and staff who, Barrow stated, will now be given “unfettered access” to the Board of Directors whenever they (employees) need to voice their concerns.

“Included in the benefits to be received under the terms of this new CBA is a 4% increase in salary each year for the next 3 years; an increase in certain subsistence and lodging allowances; an increase in the burial grant allowance; and a new paternity grant, but most importantly, an increase in the company’s contribution to the employees’ pension scheme and the provision of 4G service to all staff members”, Barrow explained.

According to the BCWU, the negotiations had been proceeding in good faith in an “open and very healthy atmosphere.”

President of the BCWU, Leann Bardalez, today said that the agreement serves to ensure that the rights of the workers are respected through consultation and cooperation.

She remarked that the signing of the agreement is especially significant since it is only three days away from Labor Day, which is when workers worldwide are recognized for the social and economic contributions to their respective countries.

The agreement is for a period of 3 years, retroactive to October 2013 through to September 2016, and the specific points agreed to are a yearly 4 percent salary increase, a 1 percent increase in company and staff pension contributions, a $25 increase per month in phone benefits for staff and free mobile Data 4G service for each staff member.

Although Barrow could not readily provide the exact figures for the salary adjustment, he noted that they are prepared to absorb those costs for the sake of their workers.

The new benefits “has its costs,” said Barrow. “Every day the Belizean telecommunications landscape is becoming more competitive from both local competitors, like internet service providers and foreign ones, such as ‘Whatsapp’, for example. The stakes are high and now even more than before, the [management] team will have to remain focused and aggressive as we continue to push for growth and market share,” he said.

Barrow went on to add, “Over the coming months, the public will see a more nimble, responsive and new-age BTL that will offer them a greater value proposition and customer experience in exchange for their business.”