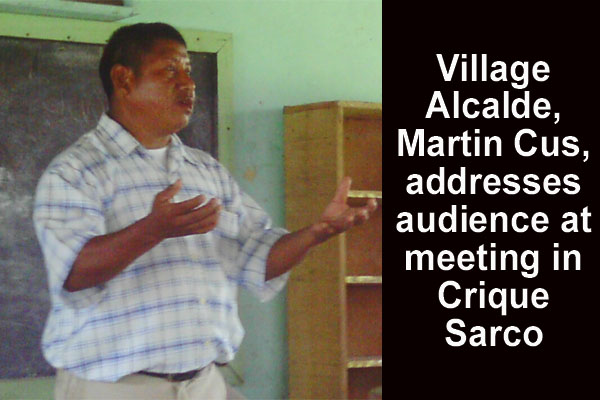 Midway Village was established in 1989 and happens to be one of the newer villages in the district of Toledo. The village is 20 miles from Punta Gorda Town and approximately 10 miles from the southernmost village of Barranco. Two weekends ago, August 30 and 31, an expedition of media personnel travelled through the graveled road leading up to Midway, maneuvering through potholes that seemed like craters and evading protruding boulders on the road surface before reaching the remote Q’echi community. Midway is said to be the midpoint of the distance on the footpath connecting the two neighboring villages, Barranco and Conejo.

On arrival in Midway at sunset, Gregory Ch’oc of the Sarstoon Temash Institute for Indigenous Management (SATIIM) and a group of Maya leaders and alcaldes got ready for a press conference in which the villagers got to voice their opinions on the oil exploration activities in the area for the first time since the onset of the public discourse on the matter.

This was one of the key reasons that Greg Ch’oc organized the media tour — in order to dispel any impression that he is the lone voice of opposition to the works of US Capital. Soon enough, his point was made clear, as the villagers themselves confirmed that Ch’oc has been appointed as their spokesperson and therefore, he speaks on their behalf whenever he speaks out about the position of the communities that stand to be affected due to the practices of the oil exploration company. One such villager remarked that many people have asked why is it that Mr. Ch’oc is always the one in the forefront, translating and interpreting for them. He then explained that the villagers elected him to be the one to speak for them because, although they might be able to speak some English or Creole, they are only able to truly speak their minds using their native language. The villager also mentioned that he was happy that SATIIM had organized the trip and the meeting, so that the community could be given a chance to speak.

One of the village leaders suggested that they would rather defend their land than to accept the kind of development that is being provided for them through seismic activities, and although there may be employment opportunities that arise, they need to consider their children who will be left behind to deal with the consequences of the exploitation of the territory, and that is why they see it necessary to collectively defend their customary lands.

Some of the Midway residents are irate about the present situation and many believe that Government and US Capital Energy are intentionally violating their rights. In this village, the majority seemed to be in support of SATIIM’s resistance against GOB and US Capital.

While that community supports the efforts of SATIIM, there are exceptions. On the second day of the media tour of the communities surrounding the Sarstoon Temash National Park – when there was a discussion with the community of Crique Sarco, it became clear that there is some division within the buffer communities.

The road to the village of Crique Sarco is in terrible condition during the dry season and more so during the rainy season. Crique Sarco is the oldest village in Toledo. To get to the village, visitors must first cross an old steel bridge with unfinished approaches on both ends. To get to the first house, which is about 500 yards from the bridge, the delegation had to pass a low-lying road that collects abundant water when it rains and trek through water and mud before entering the village properly. Once in the village though, an observer will note that all residential areas are on high land. The villagers welcomed the ‘local tourists’ to observe what they intend to preserve — their tranquil and traditional way of life. Villagers could be seen chopping firewood, husking corn and preparing their midday meal of ‘caldo’, which was generously shared with all the members of the media. The Mayan soup dish is made from local poultry, and served with corn tortillas, all grown within the vicinity of the community using age-old farming practices.

After lunch, one of the village leaders alerted the residents of the meeting to be held in one of the village classrooms by blowing into a conch shell. The villagers slowly congregated to conduct their discussion on the exploratory work within the protected area, which is also classified as their communal territory. The people of Crique Sarco have mixed feelings; there are those who strongly oppose U.S. Capital’s activities, but there are also those who don’t see the development or the company’s actions as necessarily being a threat.

One villager expressed his concern that the lands that they use to grow their crops, such as rice, beans and corn, will be affected in some way by the drilling. He said that is the reason that the community asked SATIIM to represent them, because they are aware that the resources in and around the village, from which they benefit and through which they sustain themselves, stand to be negatively affected.

Some villagers agree that since they are being coerced to accept the possible risks of oil exploration, they should be able to get a fair share of the benefits from oil exploration. One villager made mention that they are not against oil exploration, but the government and the company don’t seem to want to consider the proposals that the villagers have put forward, and don’t want to sit and discuss a way forward with them.

On the other hand, one villager who apparently misunderstood SATIIM’s role in the fight claimed that the majority of the village has gone against the proposal because the oil company has promised them employment, and SATIIM has never been able to provide them with jobs, so he doesn’t believe that the majority is in favor of the resolution.

The village chairman, Marcos Chub, admitted that the community is divided and said that he wants development, but not the kind of development that is unjust or unfair.

Villagers who are supportive of the development are reportedly frowned upon by fellow villagers who believe that these individuals are taking financial gifts to change their alliances.

The media tour was only able to garner the views of two of the five buffer communities due to time constraints, but SATIIM has promised to organize another trip to listen to the thoughts and opinions of the other three communities of the buffer zone.