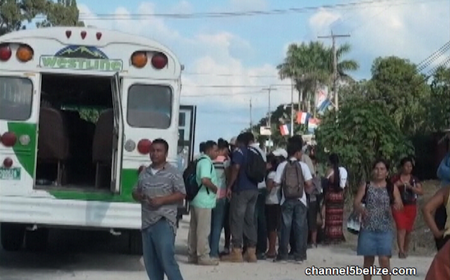 ESPERANZA, Cayo District, Wed. Jan. 27, 2016–Apassenger travelling in a crowded bus from San Ignacio to Belize City had the shock of his life when a man entered the bus through the back door when the bus stopped on the highway to pick up a passenger, beat him in the head with what a passenger said appeared to be a gun, jumped out through the back door and escaped into the bush.

The passenger was rushed to the San Ignacio Hospital, where he was treated and released shortly after. He is now recovering at home.

The conductor of the bus reported that he did not see the attacker come on the bus, but when he saw the passenger after the commotion, he realized that he was bleeding from the head.

Police were informed that a passenger had been shot in a bus in Esperanza village, and as a result, San Ignacio police responded. On a West Line bus heading to Belmopan, they saw Conrad Thomas leaning on a seat on the arms of a female, and he was unconscious.

Thomas was rushed to the San Ignacio Hospital in a stable condition, suffering from a small cut wound to the upper right side of the head.

After investigating, police learned that Thomas and his wife were traveling onboard the West Line bus from San Ignacio to Camalote, and when they were near the Welcome Center in San Ignacio, Thomas exited the bus to buy water, and he had exchanged words with a man who had sat two seats in front of them.

The man did not get back onboard the bus in San Ignacio, but got a ride to Esperanza, according to police, to wait for the bus.

The bus left San Ignacio, and when it reached Esperanza, it stopped at a bus stop to pick up a passenger, who came in through the front door.

Thomas’ wife then looked behind, because she heard the buzzer for the back door. When it opened, she saw the same man who had been sitting in front of them in San Ignacio coming in from the back.

Shortly after, she heard a “knocking sound” and saw Thomas leaning forward, and the man standing by him with a black gun in his right hand, saying “talk sick now, talk sick now,” and the man then walked out the back of the bus and jumped out.

Medico forms were issued to Thomas, and his injuries were described as wounding. He remains at the San Ignacio Hospital in a stable condition.

Assistant Superintendent Reymundo Reyes, Deputy Commander of San Ignacio Police, told Amandala that Thomas was hit with the gun, but not shot. No shots were fired, he said.
During the investigation, 20 persons were detained and released, but two men have since been detained, one of whom is a BDF soldier.