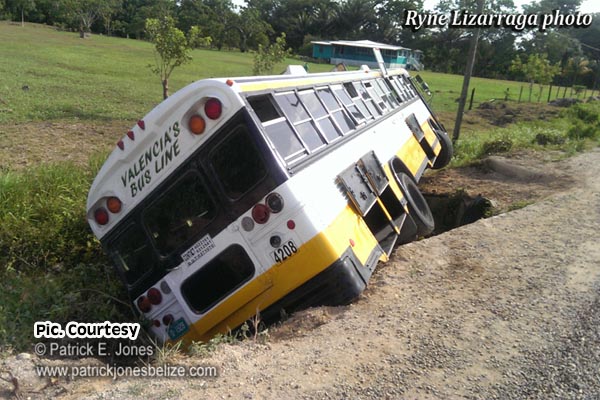 A passenger bus heading to Belmopan veered off the road at about 6:00 a.m. on Monday near Mile 47 on the George Price Highway and landed in a culvert to avoid hitting a motorcycle rider who had fallen off his bike on the highway, its driver told police.

As a result, four people were hurt on the bus, and the motorcyclist, 42-year-old Karl Tillett of St. Matthew’s Village, Cayo, had also been injured when he was hit by a van, causing him to fall off his motorcycle, prior to the approach of the bus.

They were taken to the Western Regional Hospital, where they were treated and later released.

In an interview on Plustv News, the bus driver, Ivan Valencia, said that in the distance in front of him, he saw a gray minivan and a motorcycle, traveling in the same direction, towards Belmopan. He saw the minivan brake behind the motorcycle, and he applied his brakes to avoid crashing into the van, and swerved to the left side, but the bus skidded towards the lamppost on the roadside.

Valencia then avoided slamming into the lamppost by maneuvering the bus back on the road, but the side of the van had hit the motorcycle, causing the driver to fall off , and Valencia said that to avoid rolling over the motorcyclist, he veered off the road to the right side of the road and landed in the culvert.