Candidates to be nominated for municipal elections next Wednesday 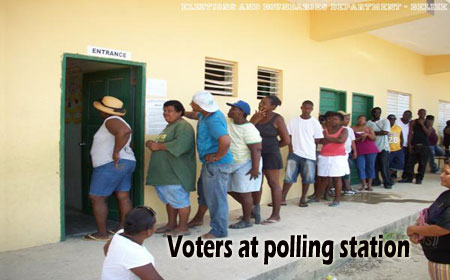 BELIZE CITY, Thurs. Feb. 5, 2015–The Elections and Boundaries Department and public officers selected to operate the polling stations on election day are gearing up for the 2015 municipal elections, while political hopefuls get warmed up for the first round of excitement – nomination day, slated for next Wednesday, February 11, 2015.

The two dominant parties – the ruling United Democratic Party and the Opposition People’s United Party – intend to field full slates for all 9 municipalities. In Belize City, both sides will nominate a mayoral candidate with a slate of 10 councilors. In the other municipalities, the district towns and the City of Belmopan, a mayoral candidate and a slate of 6 councilors will be elected.

None of the third parties or independent candidates who threw their hats in the ring won any seats, but that has not stopped them from hitting the campaign trail again for the 2015 municipals.

Wil Maheia, leader of the People’s National Party (PNP), says that their campaign is in full swing, and he feels more hopeful today than he did before that people will show greater support to the PNP. He said that 6 of the persons on his slate are entrepreneurs who have their own businesses.

The PNP is part of the Belize Unity Alliance, a grouping of third parties who have pledged to support each other. The PNP’s slate in the south has been endorsed by the Vision Inspired by the People (VIP), which is putting up a slate of candidates in Belmopan and San Pedro. Veterans Hubert Enriquez and Bobby Leslie will lead slates in those respective municipalities.

Richard Smith of My Refuge Christian Radio had sought the Alliance’s endorsement for his Belmopan candidacy, but we understand that he resigned after the Alliance decided to instead endorse the VIP for that municipality.

Like Maheia, Enriquez told us that he feels that voters are more sincere in their support for them this time around.

There are just over 104,000 persons registered to vote in the municipal elections. The last election saw a voter turnout of 67.5%