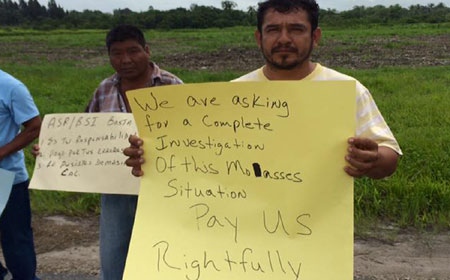 ORANGE WALK TOWN, Orange Walk District, Wed. July 27, 2016–Orange Walk police were frantically called for security purposes after a group of cañeros, about a dozen, descended upon the entrance to the Belize Sugar Industry’s (BSI) compound at Tower Hill on Tuesday in protest.

The cañeros are up in arms after BSI, owned by American Sugar Refining (ASR), proposed that cane farmers cover 65% or almost three hundred thousand dollars’ worth of the value of damaged molasses which were to be exported.

Earlier this month, Amandala had reported that several tons of molasses had been spoilt in a tank at the factory because of a phenomenon known as the Maillard Reaction, which occurs when hot molasses are pumped into storage tanks without first being cooled.

According to Alfredo Ortega, Branch Manager of the Orange Walk Cane Farmers, it is ASR/ BSI that is to cover the cost of spoilt molasses because it happened under their watch. However, ASR/BSI is vehemently refusing to accept such a loss.

When Amandala spoke to William Neal, ASR/BSI’s Communication and Government person, he explained that according to agreements between the company and cane farmers, cane farmers receive a percentage of the revenue from the sale of sugar and molasses.

However, even though tons of molasses were spoilt and deemed unfit for export, cane farmers are still demanding their percentage.

The People’s United Party (PUP) issued a statement on Monday describing the proposal made by ASR/ BSI to cañeros as being, “unjust, unreasonable and outrageous.”

The statement further reads, “based on our technical and experienced sources, we confirmed that the Maillard Reaction was a direct result of ASR/ BSI’s negligence and failure to follow standard procedures during the liquidation stage…”

The PUP further stated, “We hereby remind ASR/ BSI that the agreement signed between them and the farmers clearly states that the sugar cane belongs to and is the full responsibility of ASR/ BSI once it arrives on the scales.”

ASR/BSI fired back at the PUP in a statement which reads, “The PUP assertion that BSI should accept full responsibility for lost revenue from this molasses is contrary to the cause of the event, and the commercial agreement in place with cane farmers. The cane price is calculated as a revenue share of sugar and molasses sold. BSI was not culpable for the Mailliard Reaction which occurred. This was a phenomenon resulting from a range of factors. As such, any loss of revenue is a shared industry loss, as there is no revenue to share.”

The statement further reads, “The PUP assertion that the ‘Maillard Reaction was a direct result of ASR’s negligence in following standard practices during the liquefying stage,’ purportedly to have come from an industry expert, is a step not recognized in the sugar manufacturing process. It should be noted that the affected molasses was manufactured and handled in exactly the same way as all other molasses produced during this and all previous crops.”

Tuesday’s protest had the participation of the PUP’s Jose Abelardo Mai, of Orange Walk North, and the UDP’s Edmund Castro of Belize Rural North.

According to cane farmers, we can expect another protest which will be larger and more organized.