Home Headline Cañeros to sign “with a heavy heart”
Headline 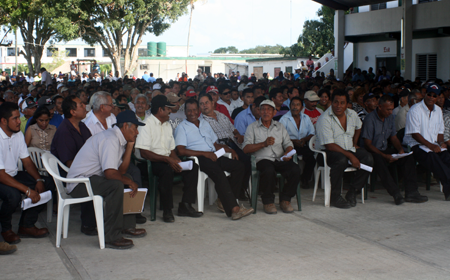 ORANGE WALK–Certain observers of the current sugar industry conflict between the Belize Sugar Cane Farmers Association (BSCFA) and the Belize Sugar Industries (BSI), which is owned by American Sugar Refineries (ASR), the largest sugar refining company on the planet, have classified the latest developments within the industry as a “dark day” for the local cane farmers, since many have buckled under pressure due to correct circumstances, and have decided to disregard their aspirations for a better deal, and to sign a new commercial compromise agreement that they recently chose to bypass at a BSCFA Special General Membership meeting only a week ago, on Sunday, January 4.

The situation has reached the point where even a legal battle has now ensued between the Government of Belize (GOB), which is also a part shareholder in the industry, and members of the association who believe that the state-run Sugar Industry Control Board (SICB) has the power to open the sugarcane crop season in the absence of a signed agreement between the growers and the millers.

Since Prime Minister Dean Barrow, at a press conference last Thursday, appeared to be washing his hands of the BSCFA when he announced that he would support a move by large growers to form their own association to bypass that entity, there is word that the many cañeros, who all have different commitments to meet, are on the verge of caving in to the conditions of the agreement, and signing with the multinational to start delivering their cane in order to preserve their jeopardized livelihoods.

Amandala spoke with PUP Orange Walk South area representative, Hon. Jose Abelardo Mai, who is also a cane farmer, at a PUP press conference which was called to address the sugar dispute today, and he told us that with no viable alternative in sight at this time, the farmers are now compelled to bite the proverbial bullet, but with “heavy hearts” and many reservations.

“I don’t see the signing process being complete by five days, and I don’t see the crop starting within the next ten days even if the weather improves. I don’t know what the future holds for us – I wish that we could at some point continue the negotiations to see if the farmers can derive their equitable benefits, but it is difficult to say at this point.

“I think the important thing right now is to start the crop and to allow the farmers to deliver their cane. There is 1.4 million tons of cane [in the fields] and I don’t see how it can be delivered given the short time [that we have to deliver] and the time we have wasted.”

On Friday, we reported that the BSCFA Committee of Management had called an emergency meeting with its 18 branch directors so as to have them take a survey of their members to discern whether the cañeros want to go ahead and sign the agreement in the face of their apparently insurmountable challenges.

While we note that no signing has taken place as yet, earlier today, BSCFA CoM Chairman, Ezequiel Cansino, said that they were awaiting the reports from the branches in order to get a consensus as to where the general membership stands, and late this evening, Orange Walk branch chairman, Alfredo Ortega, informed us that there will be yet another meeting tomorrow, Tuesday, at 9:00 a.m. at the BSCFA’s headquarters in Orange Walk, to review the results and make a final decision in regards to the signing of the disputed new commercial agreement.

In related news, we understand that starting today, the BSCFA has initiated the disbursement of the $4 million in Fairtrade funds, via cheques, to the different branches in accordance with a controversial resolution that was passed at the January 4 Special General Meeting where a majority of the general assembly voted to apportion among themselves monies that had been allocated for other initiatives, in contravention of Fairtrade regulations.

The move, which was borne out of desperation on the part of the farmers, most of whom are suffering heavily financially, will certainly come back to haunt the reeling association, which may not only face possible suspension or decertification from the European-based welfare program due to the unsanctioned use of the funds, but might also face the risk of a complete collapse due to bankruptcy.