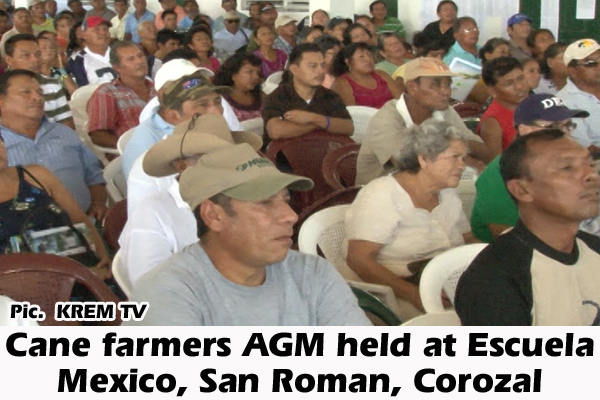 We want a bite of the bagasse millions!

Roughly 1,500 cañeros who attended the annual general meeting of the Belize Sugar Cane Farmers Association (BSCFA) held at Escuela Mexico, San Roman, Corozal, on Sunday, November 24, reaffirmed their decision to stand down on delivering sugar cane to the Belize Sugar Industries (BSI) when the season opens tomorrow, Monday, November 25—and to remain firm in their stance until a formal agreement is penned which will assure them a bite of the millions BSI has been earning from generating power from sugar cane wastes called bagasse.

There was a resounding applause as cane farmers stood in overwhelming agreement, and they indicated that they are willing to stick with their decision for the long haul.

Alfredo Ortega, Vice President of the BSCFA, told journalists Sunday that, “[Cañeros] have shouted in unity that they are committed not to deliver any cane.”

He said that that is also the sentiment of the cane farmers who were unable to attend the AGM.

If a handful of members go against the collective decision and deliver cane on Monday, they would be penalized, Ortega said. They would not get any benefit derived from the bagasse negotiations and they would be placed at “the very end” of the cue to deliver cane for the season, he added.

According to Ortega, the factory needs at least 5,000 tons of cane per day to operate, and if they don’t get that, they are unable to mill.

Meanwhile, they continue to highlight what Oscar Alonzo, BSCFA’s CEO, describes as “very deplorable” road conditions which would prevent them, in any event, from delivering cane to BSI’s Tower Hill factory Monday, the start of the crop year.

The BSCFA had asked the Government to disburse the funds to them, to implement the road repairs, because those funds have, at times, ended up in the hands of politicians who have not effectively addressed the problem.

Whereas farmers have these two major issues—the impasse between the factory and the farmers, and deplorable roads—on the front-burner, they continue to grapple with a third: the froghopper pest, which has notably caused extensive crop losses in some fields.

At Sunday’s AGM, cañeros supported a new $7 million budget for the 2013-2014 year, which includes a $1.4 million allocation to fight the froghopper infestation.

The remainder of the $7 million budget is allocated for administrative expenses, project/implementation costs and cane farmer awareness.

In related news, the BSCFA met Friday with Deputy Prime Minister Gaspar Vega, Minister in charge of Agriculture, who indicated that the Government can merely urge both sides to resolve their dispute. Vega said he would also talk with BSI, the association reported.

Ortega said that they will wait at least until this coming week to see what will be the response from BSI.

As for the severe state of the road networks, Ortega said that the Deputy Prime Minister had conveyed that this is “a countrywide problem” and Government will see how best it could alleviate the situation on the sugar roads.

Are farmers risking their international niche with the current instability in the sugar industry? Ortega acknowledged that there could be a risk. He said, though, that in 2017, when changes in the EU sugar regime take effect, the quota system will be removed, and so that is why they are clamoring now to get additional value from the sugar cane they deliver, so that when the sugar price goes down, any payments for bagasse would “cushion” the price fall.

Alonzo said that the BSI does not appear to have any intention to resolve the issue. He said that the parties had been in negotiations for months before the BSCFA decided to go public.

At Sunday’s AGM, cañeros passed a motion, affirming their position that they will not deliver cane until the bagasse deal is resolved.

(Amandala thanks KREM TV and KREM Radio for assisting us with this report.)