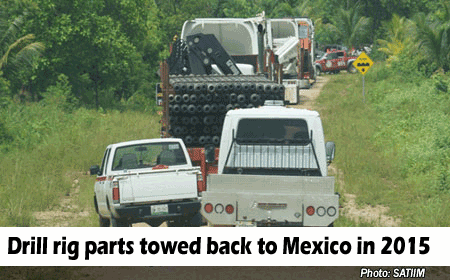 BELIZE CITY, Thurs. May 12, 2016–There are questions being raised in concerned quarters tonight over the legality of three petroleum contract extensions granted by the Government of Belize between October 2015 and March 2016—one of them being given only two months ago to US Capital Energy, which had gotten its original contract in 2001 (15 years ago) to explore for oil over lands occupied by the Toledo Maya.

The US Capital contract was originally issued four years before Belize declared its first commercial oil find. Indications are that had government negotiated new contracts with the oil companies, which they are free to do, better terms could have been acquired.

Of note is that under the law, a company gets only 8 years to explore for oil, and if it finds nothing, it should pack up and go home. US Capital has, however, been given the green-light to continue exploration in an area where the Government has said that great oil potential exists. It has been adamant in the face of opposition from the Toledo Maya.

However, last year, the Toledo Maya won a groundbreaking land rights case at the Caribbean Court of Justice (CCJ), after challenging the Government’s decision to issue those concessions without their free, prior and informed consent.

In April 2015, the CCJ entered a consent order on the matter and attorney for the Maya, Antoinette Moore, SC, told our newspaper that the consent order, as she interpreted it, means that the Government should now come to the table with the Maya leadership on existing permits and concessions.

Prime Minister Dean Barrow had said that the Government will have to consult with the affected Maya communities before deciding whether it will renew the expiring permit to US Capital Energy to continue exploration inside the Sarstoon-Temash National Park in Toledo.

“The Government has promised to the court and now the court had ordered that Government cannot issue any leases, grants… permits or concessions for resource exploitation unless they have your consent—as owners of the land,” Moore added.

It so happens that the Government has granted a 1-year extension to US Capital to explore for petroleum in Toledo; but since learning of that development, we have been unable to get comment from the claimants in the Maya land rights case.

The Government did not issue a public statement on the matter. The matter has come to our attention because copies of those approval documents are available to the public on the petroleum register, which we understand Oceana in Belize has also been perusing to keep an eye out for any new concessions given for offshore Belize.

Since January, we have been trying to determine whether US Capital, which has already invested tens of millions in its Belize venture, would be seeking a renewal of its concession to drill in the Sarstoon-Temash National Park.

As we reported earlier this year, US Capital, whose contract originally dates back to 2001, was considering whether it would seek a further contract extension from the Government of Belize. That contract, covering large portions of Toledo, including several indigenous villages, was amended in 2004, 2006 and 2008. On March 8, 2016, US Capital got a one-year extension on the contract, after approval by Minister Erwin Contreras, Minister of Economic Development, Petroleum, Investment, Trade and Commerce.

Public records sourced from the registers at the Department of Geology and Petroleum indicate that the Geology and Petroleum Department had firmly advised against the contract extension, because under the existing law, such an extension, beyond the 8-year exploration period, could only be granted had US Capital been in the process of drilling a well.

However, Amandala readers will recall that the company’s last well, drilled inside the Sarstoon-Temash National Park, had been capped since last April—right before the CCJ ruling—when the company was forced to plug and abandon the well due to the stench of a dangerously high concentration of hydrogen sulfide fumes coming from underground at the drill site.

Again, the public records indicate that this is not the first time such an extension was granted to a petroleum company which was not in the process of drilling. Last October, separate one-year extensions were granted to BelGeo Limited, whose concession includes lands in the Orange Walk and Corozal Districts, and Blue Creek Exploration, whose concession area is located in Orange Walk. Both companies had originally received contracts under the then People’s United Party administration, issued along with 5 others on October 12, 2007. Those contracts were to expire last year.

Amandala understands that there is also a difference of opinion between the Solicitor General and the Department of Geology and Petroleum over whether those extensions could be legally granted.

Director of the Department of Geology and Petroleum, Andre Cho, today explained to us, when we asked him about the disclosures discovered on the petroleum register, that the recommendation was not made by his department, because the law is very specific—that extensions are granted to companies which had already started drilling a well. In the case of BelGeo, they have not yet drilled but the claim by the legal advisor to the Government is that the plans on paper fulfill the legal requirement.

7 petroleum explorers left on the map
Down from 17 companies in 2010, there are now 7 companies contracted to explore for oil in Belize—none of them having offshore concessions. 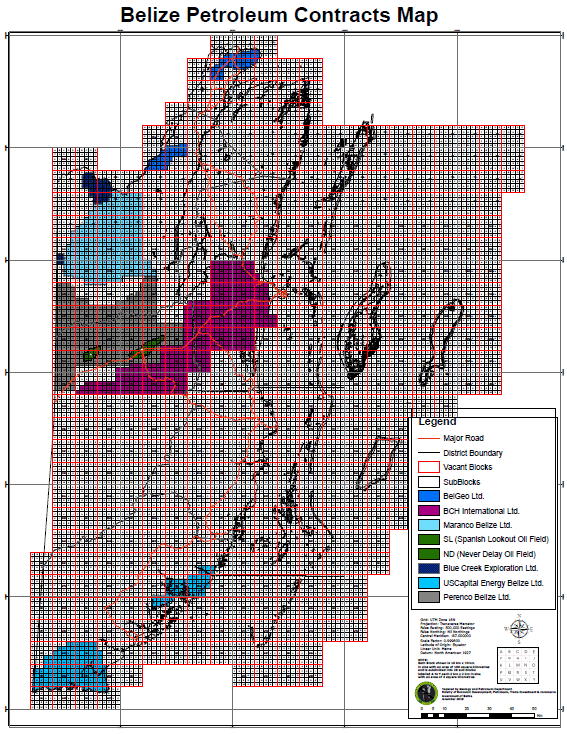 A government-imposed moratorium on offshore drilling remains in effect; however, Oceana in Belize, along with the Belize Coalition to Save Our Natural Heritage, has been lobbying for a complete ban on offshore drilling in Belize. The Government has not acceded to that request, which has recently been restated by the World Wildlife Fund (WWF) in Belize.

The irony is that apart from the operations of Belize Natural Energy (BNE) at Spanish Lookout, which we understand is reportedly yielding output of only 1,300 barrels a day, petroleum activities in Belize are on pause.

We note that over the past decade, Belize Natural Energy has extracted roughly 10 million barrels of oil from the Spanish Lookout site, and if earlier estimates putting the amount of recoverable reserves at 14 million barrels hold true, the company, which has 25 years to fully develop its oil fields under its contract, may not be too far away from exhausting those reserves. However, it appears that BNE is holding back production since oil prices are still below US$50 a barrel.

For instance Maranco, whose concession area is located in Orange Walk, is still trying to source a partner to provide some capital injection into the project, while Perenco, which had just two drilled wells in the Cayo area, came up dry in San Ignacio and the Valley of Peace area.

In the case of the third company granted an extension, BCH International Limited, the company formerly owned by Zaid Flores, who sold to Pacific Rubiales, a foreign company, the indication is that there are prospects for the drilling of two wells east of Perenco. BCH’s concession area spans the Cayo and Belize Districts, including the stretch of land through which the Philip Goldson Highway runs. The Belize City area is now excluded from the concession zone.