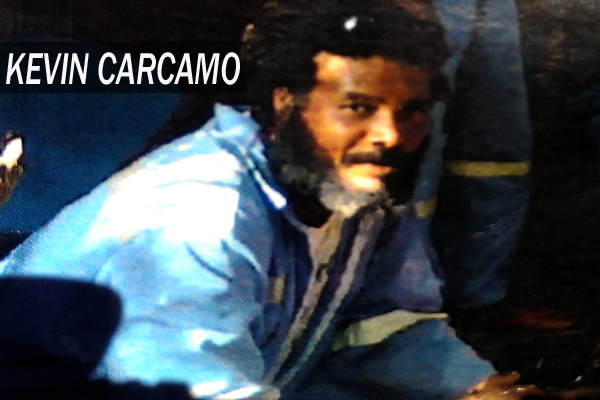 HATTIEVILLE, Belize District—The chairman of the Hattieville village council, Kevin Carcamo, 43, has been missing for 16 days now, and while his trail is growing colder with each passing day, members of the Belize Police Department and a group of independent investigators have not yet given up, and are still trying to locate the popular father of four, and to solve the case of his mysterious disappearance.

Last Friday, August 1, a search party stumbled upon a bloodied bush stick on the banks of the Sibun River in the Freetown Sibun area of Hattieville where Carcamo was last seen. Although it was seen as a mild breakthrough by way of speculation that the blood might be his, investigators have reported that while the blood was human, the results of their tests were inconclusive, and they are not sure whether it is the chairman’s blood.

They were also able to retrieve a single strand of hair, and since Carcamo is dreadlocked, it is believed that it may also be his; however, his family has agreed to provide hair samples from his children so that forensics personnel could establish whether it is indeed Carcamo’s hair.

Carcamo, a linesman who was employed with Discoverseis Expeditions, an oil exploration company based in Belize since 2006, has been missing since July 20 when he and a group of surveyors set out to conduct seismic testing for oil in a deeply forested area a few kilometers away from Freetown Sibun, just past Hattieville in the Belize District.

Since then, intensive search efforts – which were being carried out by fellow villagers and employees, as well as police, military and Coast Guard officials – have dwindled significantly, and at present, the Police Department and a few villagers and relatives have been searching for him on their own, since the company with whom Carcamo worked has left the search to the authorities and resumed normal operations.

Nevertheless, his family is still clinging to hope for some sort of closure to the nightmare, and there is still a reward of $10,000, being offered by Discoverseis for information which leads to Carcamo’s safe recovery.