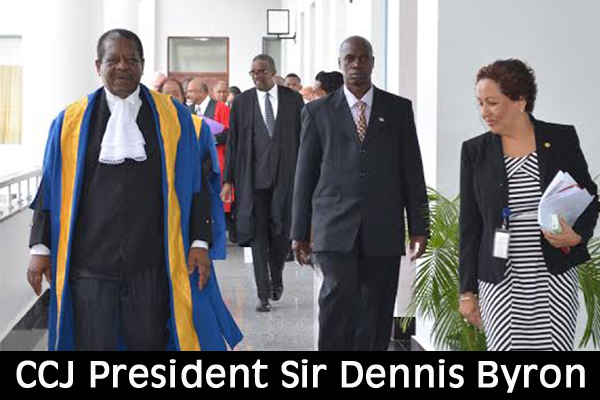 Among those attending the session in Guyana was the Chief Justice of Belize Kenneth Benjamin.

The CCJ was established in 2001 and inaugurated in 2005. The court serves two functions for member states of CARICOM: In its original jurisdiction, it deals with matters such as the right of CARICOM nationals to move freely between countries and to, likewise, face no hassle in moving their money and business to another CARICOM country. Secondly, the court is empowered to hear appeals from the three acceding countries.

Speaking to the full court at a Special Sitting in honor of Justice Bernard, LaRocque said that no better tribute could be paid to her than for all the member states of CARICOM to accede to the Court in both its original and appellate jurisdictions.

“There can be no doubt of the court’s ability to render well thought-out and reasoned judgments that can stand the scrutiny of its most ardent detractors,” LaRocque told the court, which sat at the Guyana International Conference Centre, just outside Georgetown, Guyana.

“The CCJ is an integral edifice in the regional architecture as designed within the Revised Treaty of Chaguaramas. But arguably, even more important, the court in both its jurisdictions represents the essence of our independence and sovereignty and is essential to the progress of the integration movement,” the Secretary-General said.

CCJ president Sir Dennis Byron, assisted by the full complement of judges of the court, presided over the ceremony.