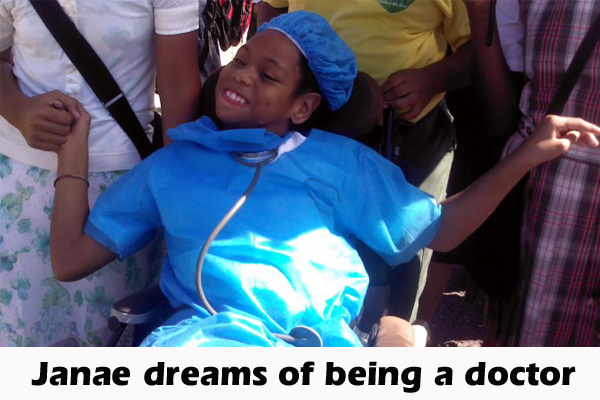 Janae Matute, a young girl of Roaring Creek, Cayo, who was born with cerebral palsy – a medical condition marked by impaired muscle coordination — was awarded over $2 million in damages by Belize courts. Her attorney says that she has not collected a penny of that award, issued by local courts against Dr. Raju Meenavalli and the Government of Belize. They are hoping that the country’s final appellate court, the Caribbean Court of Justice (CCJ), can bring them closure in a legal battle that has spanned more than a decade.

Janae, a first form student at Belmopan Comprehensive School, will turn 13 on December 20. In 2000, Dr. Raju Meenavalli delivered her by C-section. Janae’s mother, Georgia Matute, claims that the doctor delivered her baby prematurely at 36 weeks.

Meenavalli, a former government doctor now in private practice, had been accused of negligence and medical malpractice in the Janae Matute case.

Janae has had to use a wheelchair to get around, and she is dependent on her mother, who also attends school with her daily. As a consequence of her child’s dependency, Georgia Matute has had to quit her government job. The Court of Appeal had upheld the award of $681,757 in compensation to Janae’s mother for travel and medical expenses, pain and suffering, and loss of earnings.

“The mother gave up her job in [the] Ministry of Natural Resources to care for the child,” Senior Counsel Fred Lumor, attorney for the Matute family, noted.

“Not one penny has been given to her for therapy or anything,” he also said.

The Supreme Court of Belize had awarded a total of $2.5 million in 2010; and the Belize Court of Appeal revised that award to $2.13 million last year.

Georgia and Janae are now anxiously hoping for a conclusion to the protracted legal battle. The Caribbean Court of Justice has set Monday, December 9, 2013, for case management via video conference.

Lumor told Amandala today that the hearing will likely be held in 2014.

Lumor said that neither Dr. Meenavalli nor the Government has made any attempt to settle with the Matute family, although he has written many letters – to which, he said, he has received no response.

Of note is that the Government of Belize is not a party to the CCJ appeal.

Meanwhile, Janae is doing her best to face life with a smile. Her mom told us that ever since she was in preschool, she has been talking about being a doctor – that, she said, is her life’s dream.

Janae is doing very well in school, but she is in need of another wheelchair, her mom told us.

Life’s challenges notwithstanding, Janae is in good spirits, her mother said. She said that the school and the students in her class have lovingly embraced her, and they are trying to make her time at the Belmopan Comprehensive School a memorable one.