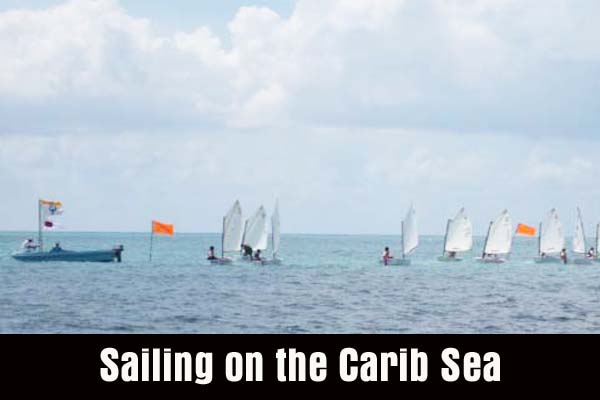 Under the brilliant sunshine and by the beautiful waters of the Caribbean Sea, the Belize Sailing Association (BzSA) held the St. Georges Caye Battle Regatta on Sunday, September 2. Hundreds of Belizeans gathered to participate in the opening ceremonies of the September Celebrations, under the auspice of His Excellency the Governor General, Sir Colville Young.

The Chairman of the National Celebrations Commission, the Hon. Manuel Heredia, Jr., addressed the audience and often referred to the theme for this year’s celebrations: “Many Faces, Many Dreams, One Goal, Celebrating Belize.”

Alan Usher, Secretary of the Belize Sailing Association, spoke of our organisation and its goals. This is the 3rd year of the Battle Regatta St. Georges Caye. It was an honour for BzSA to hold our Regatta as the main event for the launch of the September Celebrations. Secretary Usher also spoke of the many clubs now in place throughout Belize. He proudly announced our goal of entering a team in the 2016 Olympics to be held in Rio de Janerio. The audience responded most positively to this announcement, and BzSA looks forward to receiving support for this endeavour.

Throughout the day, everyone was treated to the glorious sound of music performed by the Pantempters, a unique steel drum band from Belize City.

BzSA held several races in a variety of classes. The sailors of the Optimist class boats raced several heats leading to the finals. Among the participants were 4 sailors from the Placencia Sailing Club who were attending their first Regatta. According to Maria Cabral, founder of the Placencia Sailing Club, the children were very nervous. They need not have worried, as all the young sailors from BzSA showed their spirit of camaraderie and healthy competition, as they cheered the Placencia sailors on to success.

The Medal awards ceremony was a momentous occasion for all as the Governor General presented the medals and trophies to the winners. The following are the results of the various races.

Congratulations to all the participants in the Regatta! Congratulations and a heartfelt “Thank You” to the September Celebrations Committee and the members of the organizing committee of the BzSA!