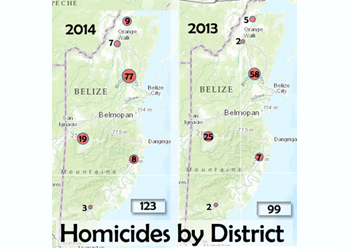 The latest crime statistics released by the Belize Police Department confirm that 2014 saw 24% more homicides occurring in the country than in 2013. The stats indicate that 24 more persons were killed in Belize than in 2013, when the country reported 99 murders.

The final count for 2014, according to police, is 123 murders. Our mapping of the data by district demonstrates that the murders showed the same geographic pattern in 2014 as they did in 2013, with central Belize – the Belize and the Cayo Districts – reporting the vast majority of cases.

The data show that consistently over the past two years, roughly 6 in 10 murders happened in the Belize District, with the second highest number of homicides occurring in the Cayo District.

However, Cayo did see a reprieve in the number of slayings, with the homicide count for 2014 falling 24% over the previous year.

Meanwhile, killings in Orange Walk more than tripled. In 2013, that district reported only two murders, but in 2014, there were 7 homicides reported in that district, including the gruesome slayings of Ramon Cervantes, Sr., and Sonia Abac, which sent shockwaves across the nation.

Overall, major crimes – murder, robbery, theft, burglary, and rape – were up by 4% in 2014, but the increase in the number of rapes was astronomical.

According to the police data, there were 17 more rapes in 2014 – an increase of 65%, and 6 in 10 cases occurred in the Belize District – incidentally, the same pattern seen with the geographic distribution of murders in Belize for 2014.

There was also an escalation in shooting incidents in the Belize District during 2014. In fact, the police report an increase of 40% in the number of incidences in the district while nationally, the figure was up by 25%.

Robberies and burglaries showed nominal declines of roughly 2% and 6%, respectively.