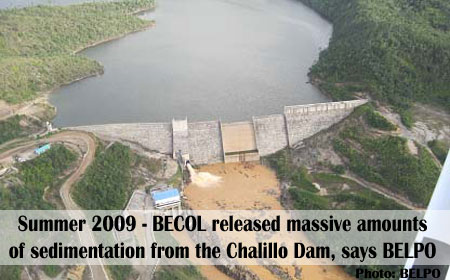 BELIZE CITY, Thurs. June 23, 2016–A battle which emerged 18 years ago—back in 1998—between the developers of the Chalillo Dam on the Macal River in the Cayo District and the Government of Belize (GOB), on the one hand, and a group of environmentalists, on the other, did not block the commissioning of the dam back in 2005, but George Gonzalez and his wife, Dr. Candy Gonzalez, who lead the Belize Institute of Environmental Law and Policy (BELPO), are hoping that the Inter-American Commission on Human Rights (IACHR), an agency of the Organization of American States, will rule in their favor in a petition (P-633-04) filed as far back as 2004.

“The opening of the case is, above all, a victory for the affected communities, the Maya people of Belize and local social movements, who have endured for all these years, and remain strong and determined in their search for justice and compensation,” said Candy Gonzalez, BELPO spokesperson, who told us that they are seeking “mitigation and restitution” for affected communities.

Last October, the Commission approved the petition and started to receive submissions from the parties: BELPO and the Government of Belize. BELPO told us that it completed its submissions on June 16, 2016.

BELPO explained this week that in their brief to the Commission, they “show how the riverine populations have been harmed: water quality has been so degraded that people can no longer bathe in or drink the water; fish have been poisoned by mercury leaving citizens without their vital source of protein; more than 300 Mayan archaeological sites have been lost under the reservoir, eliminating a large body of knowledge to the Maya; changes to river flows and sediment deposition have destroyed farms and ecotourism businesses along the river and unemployment has risen.”

“As an organization representing the victims of the Chalillo Dam, BELPO remains committed to exposing the human rights violations directly caused by the dam’s construction,” BELPO added.

According to the IACHR approval, “The petition was submitted on behalf of BELPO and ‘all Belizeans particularly Mayan people of Belize; members of the Cristo Rey, Bullet Tree, San Ignacio, Santa Elena and Santa Familia communities; members of the Tour Guide Association; tour operators, resort owners, and other business peoples, all other affected Belizeans,’ (hereinafter, ‘the alleged victims’).”

BELPO shared a photo taken in 2009, when it said that a massive amount of sedimentation was released into the Macal River, contrary to effluent regulations. Gonzalez said, “…that water made its way, to the Caribbean Sea.”

She added that, “The Macal and Mopan River meet at Santa Familia village (branch mouth) to form the Belize River so it is a source of water for almost half the country.”

According to Gonzalez, “The GOB has also failed to inform the people on the quality of the Macal River water, to disclose mercury levels in fish to the public on a timely basis and to provide a viable warning system to alert downstream populations of dam breaks, including the failure to disclose that the dam is built in a seismically active area.”

The last mercury advisory issued by the Ministry of Health warned against eating bay snook, baca and botasi catfish from the river, due to high mercury levels which, it said, could cause “mental retardation in children, poor development of infants, vision impairment, nervousness, weakening of muscles in the hand and feet.”

Gonzalez said that the fish advisory from Cristo Rey has been removed, although there is no indication that the mercury advisory from the Ministry of Health has been lifted.

She also expressed concerns about the siren system in place to warn area residents of a potential dam-related disaster. She said that there is “no viable emergency warning system.”

However, she pointed to recent announcements that meetings will be held in the San Ignacio area later this month to discuss the warning system. Gonzalez notes the development, perhaps due to the IACHR decision, and also points a directive from the Belize Supreme Court for those meetings to be held during the hurricane season, which spans June to November.

The IACHR is also leaving the window open for a possible settlement between the parties. According to Gonzalez, “They said that we can ask the government if we could come to an agreement or settlement. We said that if the government is willing, we would be willing.”

What are the next steps? Gonzalez told us that the Commission has given the Government of Belize three months to respond to BELPO’s allegations.

“Then after that, it goes back to a committee. We’ve requested that they come here… We said that a lot of people would not come forward because they are afraid,” Gonzalez said.

After hearing from both parties, the Commission will render a decision based on the evidence, taking into consideration what the Government’s response is, similar to the decision that they issued in the Maya petition before the same body, Gonzalez explained.