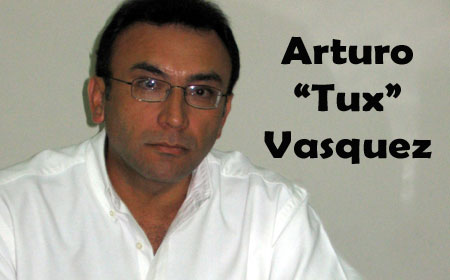 BELIZE CITY, Thurs. Mar. 17, 2016–Some Belizean citizens have publicly called on other Belizeans to boycott trade with Guatemala in the wake of a recent report by the Government of Belize that tensions between Belize’s and Guatemala’s military on the Sarstoon are at an all-time high and in the face of assertions by Guatemala that it will exercise sovereignty over the entire Sarstoon River—although its boundary with Belize runs along the river’s mid-channel.

However, Arturo “Tux” Vasquez, president of the Belize Chamber of Commerce and Industry (BCCI), does not support such a boycott.

“I don’t think that we are at that point as yet. I don’t think it would be feasible for us to do that,” he told Amandala in an interview today.

Bonds of trade tie Belize and Guatemala: New trade agreement signed in December 2015 in the presence of the OAS, says Vasquez

He said that Belize is a small nation and there is a lot from which we can benefit by keeping a good business relationship with Guatemala.

He said that the problem that Belize and Guatemala are facing has to be handled diplomatically and the aim should be to ensure that the trade relationships remain good.

He does not, though, believe that Belize should sit back and accept what is happening.

Belizean businesses source items such as PVC pipes and concrete from Guatemala, and Belize sells cattle to Guatemala, Vasquez said.

While the partial scope agreement lists 72 items for export from Belize and Guatemala, Belize is only exporting 12. They include orange juice, red kidney beans, fish, livers/roes, shrimps/prawns, live poultry, live swine, and corn.

He told us that last December when Chamber officials visited Guatemala with Ministry of Foreign Affairs officials to sign a two-year cooperation agreement with their trade counterparts there, accompanied by the Organization of American States (OAS), one of the prominent issues was tackling the informal trade of cattle between Belize and Guatemala. Guatemalans come to Belize with huge amounts of Belize dollars to buy cattle, he said.

According to Vasquez, they also discussed revising the list of items included in a pre-existing partial scope agreement with Guatemala so that the agreement would be more beneficial for Belize.

We asked whether the cross-border trade at Jalacte was discussed, but we were told that this is not something which the Chamber has been dealing with directly.

“Contraband is a big thing at several of the borders,” Vasquez said.