From champion ice cream vendor to drug courier and pimp 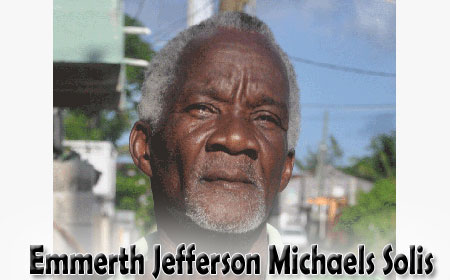 BELIZE CITY, Thurs. Dec. 17, 2015–Emmerth Jefferson Michaels Solis may not be known by the younger generation of Belizeans today, but in his heyday, Solis was one of the best homemade ice cream makers and sellers in Belize City.

(Emmerth Solis’ ice cream business was not connected to Solis Ice Cream, which was a shop that was located on Cemetery Road, where Belizean Chinese Fry Chicken is now located.)

Today, the 59-year-old Solis shared his story of how he went from selling ice cream in the streets of colonial Belize City to how he got involved in the drug trade and became a courier for an Orange Walk-based drug dealer, a job which landed him in a Mexican federal prison.

After years of a tragic life in and out of different prisons in Mexico, the United States and Belize, all that Solis wants more than anything now is to return to the streets of Belize City with his homemade ice cream, but he is desperately in need of a manually-operated 10-quart ice cream tub to make that dream a reality.

“I ran into certain folks and I got carried away. I was trying to make my money too fast,” Solis said, explaining how he ended up spending 10 years, 3 months, and 14 days in a Tijuana, Mexico prison.

“That’s where I learned to speak, read and write Spanish,” he said in a matter of fact tone.

After his prison time in Mexico, Solis described how his life went into more downfalls, which eventually landed him in prison, this time in the US.

Amandala asked Solis what kind of drugs he tried to smuggle when he was busted in Mexico.

“Three kilos of cocaine,” he replied.

“Even though the man I was working for is dead and gone, he is resting, I am not going to call no names,” Solis said reflectively.

“I took the three kilos of cocaine all the way up from Belize City. I knew the border, because I used to run cars and stuff, so I knew I was qualified to make the run,” he said.

Solis said that the contact person to whom he was supposed to deliver the cocaine was the reason that he ended up getting busted.

“I was supposed to meet him in San Antonio, Texas, and I went there and stayed two days and he did not show up. So I went back across the border to Tijuana, because I was not familiar with the San Antonio borderline,” he explained.

“Let’s cut to the chase and tell us how much you were supposed to be paid if these three kilos of cocaine were delivered successfully,” Amandala pressed Solis.

“How much were that three kilos worth on the streets of the US?” Amandala asked.

“I’m talking $25,000 per pack, but when they cut that and cook it down, you looking at almost a million dollars,” Solis explained.

“And this money that you were supposed to be paid, how was this payment going to be done,” Amandala asked.

Solis said that at the time he took the job to deliver the cocaine, he had a girlfriend and three children.

“As a matter of fact, she had just had my last kid, which is my one and only daughter. We were living in Orange Walk, which is where my connection was made. It was a hell of an experience. I cannot sit down here and tell you nothing different,” said Solis.

Solis said he had the drug stashed in his backpack.

“Like I said, I knew what I was doing. There was no immigration, there was no checkpoint. This was in 1982, the year after Belize got independence. In those years, it was free to travel that kind of way, especially on the train,” Solis stated.

“So how did you end up getting busted in Mexico?” Amandala asked.

“I was on La Cia Revolucion, downtown Tijuana, Mexico. I am in this motel, but I always have room service for the first couple of days I was there. But you know, I am a Belizean, I like being outdoors. So, I decided to take a walk and go by the liquor store. At the time I went to the liquor store, the maid used to come and I give her a break to change the bedding. But when I came back I saw three guys standing on the balcony, waiting.”

It turned out that those three guys were Mexican Federal drug agents.

“They had to have been informed by the maid that I had drugs,” said Solis.

“How would the maid know that you had drugs?” Amandala asked Solis.

He explained that he left the room and the maid probably searched his stuff and called the authorities.

“I went to the store and when I saw these three individuals going back to my room, I had no idea that they were the law. When I got busted, I had four thousand and odd US dollars on me. The men told me that if I give them the money, they would just keep the drugs and let me go. Well, I ended up to where I was sentenced to fifteen and a half years. They took the money and the drugs and whipped my a**,” Solis recalled.

“It was rough, the federal law is nothing to play with, believe the old Mutt, that ice cream man,” he said.

Solis explained that he had just come out of Belize Central Prison a few weeks ago, because he had owed the court a small amount of money for a marijuana possession fine that he had not paid.

He dived in his pocket and pulled out his wallet: “You’re not going to believe this paper,” he said.

“Ms. Fraser [the Senior Magistrate] said, ‘don’t worry, I will run both these sentences concurrently. I ended up doing four months. It happened so funny. I had just got through smoking a joint and when the police came, one of them said, ‘you smell good.’

“I replied ‘yes, sir, I had just got through smoking.’

“Now he came up with this proposition that if I have more, let him have it, if he had to search me, he would take me in. Well, I gave him what I had. But the man [police] did not keep his end of the bargain,” Solis recounted.

Amandala asked Solis to tell us about his experience at the Belize Central Prison.

“Boss, the Belize Central Prison was made for people like me and you. But what I would like to tell my brothers out here, don’t let anything tempt you to go up there. Prison life is not nice. The food, you got to pick the rice when you are eating,” he said.

Solis explained that he went wrong in his life because he ended up using drugs – crack cocaine and heroin.

“I learned about heroin when I was in the penitentiary in Mexico,” he said.

Solis said he ended up coming back to Belize during the time when the PUP government was in power and they had signed a prisoner exchange agreement with Mexico.

“A bunch of us had got caught up in Mexico, and I was among the first to be released and sent back to Belize. The old prison was on Goal Lane, and I and the others spent about three weeks there after we were sent back to Belize,” he said.

“I headed back to the US after I was released from prison. Then I got into pimping in Las Vegas,” Solis added.

Solis said pimping is a federal offense in Las Vegas, and he got caught up in that.

“You’re working on a certain block on the corner. Now, if a ‘sugar daddy’ should just step up by and he want to take a girl for a few hours or an all-nighter, that used to happen; for that, they would make $500 and I would get $150 out of that. I used to sell crack cocaine, and the girls would credit from me, that’s how I made some of my money,” he said.

Solis disclosed that when one of the girls whom he was pimping was going with a customer, he would take down the license plate of the customer, “Because if anything should happen to any of these girls, it’s you the FBI would come looking for,” he said.

Solis said that he was working on his own.

“Where did the girls come from,” Amandala asked Solis.

“They were from North Las Vegas. They were all white girls. They had no hesitation. You dress them to your leisure and let them know the rules of your game, and you can’t go wrong from there. They were into that game to make money; they were fine-looking women, with their own cars. They get high every day and party,” he said.

“I know you don’t have me on horns right now, but I need a ten-quart ice cream tub,” Solis remembered, as our interview came to an end.

“I really want to get back into my business of making and selling ice cream,” he said.