Changing the Coat of Arms 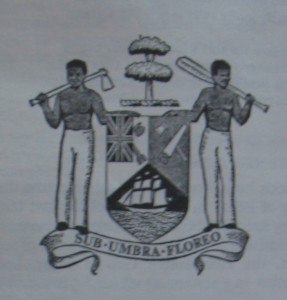 Today, most versions of the Coat of Arms have a fair-skinned and a black man. Still others have eliminated the black man altogether, putting in his place two fair-skinned men.
For the benefit of our readers, and especially the young generation, we reproduce the original rendition of the Coat of Arms, one of the national symbols of Belize, and explain its original meaning.
If one were to look for an explanation in modern-day texts, they would mostly say that the two men represent logwood cutters in colonial times. The earliest logwood cutters on this land, under British reign, were African slaves. According to the History of Belize, Chapter 5, “Slaves in Belize were initially used to cut logwood.” British Honduras was built up on the trade of logwood and mahogany, and largely with the forced labor of black Africans.
The GOB website (www.belize.gov.bz) states, “The Coat of Arms embodies an important aspect of the history of Belize, as the mahogany industry formed the basis of our economy in the 18th and 19th centuries.”
The motto is: Under the shade of the tree I flourish – Sub Umbra Floreo.
Who was it that flourished under the shade of the tree during that era? That “I” did not represent those who labored in the logwood and mahogany camps, but the colonizers, who flourished in those days on the backs of the slaves — who paid with blood, sweat, tears and sometimes their lives to enrich the British.
Coat of Arms of British Honduras
Granted by Royal Warrant on January 28, 1907
ARMS: Per chevron and in chief per pale, argent, or an azure, in the dexter chief a squaring axe in bend sinister, surmounted by a paddle in bend. On the sinister chief a beating axe in bend, surmounted by a saw in bend sinister, and in base on waves of the sea a ship in full sail, all proper, and a canton of the Union device.
CREST: On wreaths of colours a mahogany tree proper.
SUPPORTERS: (Dexter) A Negro, proper, breeches argent, holding over his shoulder in the dexter hand a beating axe, as in the Arms (Sinister). A like Negro holding over his shoulder in his sinister hand a paddle, as in the Arms.
MOTTO: Sub umbra floreo [Under the shade of the tree I flourish]
(A color version of the Coat of Arms can be seen upstairs the Turton Library on North Front Street. This version came from the Archives Department in Belmopan. The text was taken from the Turton Library version.)
Facebook
Twitter
Pinterest
WhatsApp
Print
Previous articleNolle prosequi for Leroy Gomez in rape trial
Next articleBetween the money and “di massive”