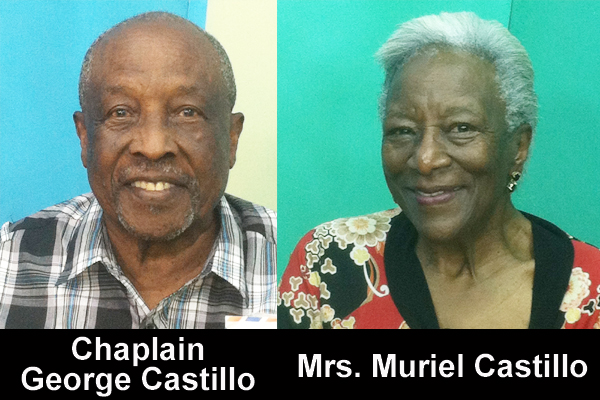 Castillo is the 2nd Black Chaplain in the history of the United States Federal Bureauof Prisons: Mrs. Castillo

Chaplain George Castillo, the Dangriga-born elder who has retired from serving as Chaplain of the Federal Bureau of Prisons in the USA and author of the book – My Life Between the Cross and the Bars, returns to the USA tomorrow, after spending time home to celebrate his Garifuna roots – highlighted in Belize every November.

Chaplain Castillo traveled with his wife of 56 years, Mrs. Muriel Castillo of Brooklyn, New York. Mrs. Castillo first visited Belize in 1970 and that was the most memorable of her four trips to The Jewel. She speaks of Belize with a beaming smile on her face, just as she does of her husband – who says the couple is still honeymooning.

Ramos was one of Chaplain Castillo’s mentors. Chaplain Castillo said that a prophecy given by Ramos that he, Castillo, would occupy the Methodist Mission House in Dangriga did come true some years later. Chaplain Castillo, like Ramos, puts great emphasis on education. Although he did not complete high school here in Belize, Castillo worked and studied in the US and as a result of his industrious efforts, made history in that country.

“George was the second Black Chaplain in the history of the United States Federal Bureau of Prisons. And that is rather historic. With all of the Chaplains that America has produced, Black Chaplains, [YAHUAH] just blessed him to be the second one. So there was perseverance, problems that we had to go through, things that we [had to] overcome,” his wife said.

Chaplain Castillo reminisced: “I remember my first job in Dangriga. It was at the Agricultural Station; it was 60 cents a day. It was in either ‘48 or ‘49. When I went to America in 1952, the minimum wage was 75 cents an hour.

“And it’s there where I started, and the first 5 years of my education in America was going to evening school. I worked fulltime. Eventually I had a family and I still went to school and that young lady [Mrs. Castillo] there, she helped me to be sitting here beside you now. I still remember her telling me, ‘Okay, Daddy. You go study; I’ll take care of the kitchen.’ And I did,” he said.

Mrs. Castillo, a former teacher and program evaluator, notes the importance of self-motivation. There is so much knowledge out there and with a little self-motivation, you’d be surprised how people could enhance themselves, she said.

However, she notes: “There is nothing that comes easily in life without working for it!”

“I advocate men going to high school. Upon completing high school, they learn a marketable skill. Having a marketable skill would be very helpful for us in Belize, as we are progressing technologically and what not,” said Chaplain Castillo, noting the need for automobile repair people, painters, locksmiths, carpenters and plumbers.

“You name it, we could use them. If someone comes out of the prison who has attained one of those marketable skills, he is able to be employed right away, but if he doesn’t have a skill, what is he going to do to make a living?” he questioned.

The incarcerated gets his three meals a day: “three ‘hots’ and a cot,” Chaplain Castillo said.

He also expressed concerns over a high rate of recidivism, as some inmates return to prison “because they can’t cut it out here…,” he said.

“Some would be surprised to know that the families out here suffer more than the incarcerated,” Chaplain Castillo said.

Mrs. Castillo said that in the US, inmates go to half-way houses after serving their prison terms, to allow them to transition back into society.

Chaplain Castillo noted that, “Ninety to ninety-five percent of the incarcerated will be walking the streets again. So we need to be mindful of that – that when you send them to prison, and there are several who should be sent to prison, we have to remember that they are coming back out again – they are going to walk the streets again. They’re gonna walk Albert Street. They’re gonna walk Regent Street. You name any street in Belize and those incarcerated people will walk again.”

Skill training is thus vital to reducing the risk of an inmate resuming criminal activity, he explained.

“A lot of our men don’t realize how difficult it is until they are incarcerated. Since the book came out, I have been busy going around speaking to individual groups, sororities—you name it, and my aim has been that we should incarcerate but sending them to school during incarceration. It is said, and I believe it—that the more education one has the less chances he has of going to prison. So I advocate going to high school for those who didn’t finish high school before their incarceration,” Mrs. Castillo said.

In the US, those who had not completed high school during their first 12 years of mandatory education get a second chance to do so by taking courses and taking a test at the end to earn their high school diploma – which is the GED (General Education Development), Mrs. Castillo said.

“And that’s what my husband did when he came to the United States. He did not have a high school education but with perseverance, he earned one through the GED program, and it is still a valuable program,” Mrs. Castillo said.

Chaplain and Mrs. Castillo raised three children: Joseph (now deceased), Tony and Marcelle, and they emphasized the need for the community to return to raising children collectively as a village.

“Volunteer time to help and teach the young children who may be having difficulty with math or whatever subject area but more than that to have someone they can come and talk to. Many of the parents are too busy and involved in their own lives. Working hard maybe? But whatever the reason, the children are not getting the attention they need. So those of us who can must be willing to seek out and help others,” Mrs. Castillo said.

Mrs. Castillo said that while she cannot speak of Belize or offer suggestions for the culture, she does know that they have the same problems in the US. She emphasizes that old adage: “It takes a village to raise a child!” and added that, “…whether we have children or not, we ought to look at each other as a family and help wherever we can.”

“I want to encourage all of the parents to please stick with it. I know it’s hard. It is not easy – parenting. And with all of the different temptations that are available now, it makes it a little more challenging, but stick with your children, support them and encourage them, and I would ask everyone to be a good neighbor to a child. Remember, we are all in this world together and we must learn to live, love and help one another,” Mrs. Castillo urged.