Chef Ainsley held up in his establishment 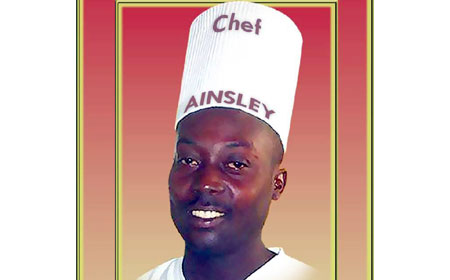 BELIZE CITY, Sat. Aug. 13, 2015–Robbers netted an estimated six thousand dollars in cash, jewelry and mobile devices after they held up a local chef and his staff at gunpoint just a few feet away from a police checkpoint.

Ainsley Castro, 38, known to many as Chef Ainsley, has become well-known in the healthy living community as a result of the wholesome cuisine he sells from his kitchen on Balan Street off the Lacroix Boulevard in the St. Martin De Porres area of Lake Independence.

The chef turned entrepreneur has been making a living by selling healthy entrées since moving on from his post as chef at the Radisson Hotel almost fifteen months ago.

Castro reported to police that sometime around 1:30 p.m. on Friday, as he was cleaning up after a day’s sale, two dark-skinned, medium-built men entered his establishment and ordered everyone on the ground.

One of the perpetrators, armed with .9mm pistol, then told Castro and his staff (two assistant cooks, his son and his son’s cousin) that they were being robbed.

After hitting Castro in the head repeatedly with the pistol, the gunman then demanded that Castro turn over all his money.

The disoriented chef reportedly turned over $3,000 in cash that he had withdrawn from a credit union earlier on Friday, along with a gold chain valued at $1,000, a cell phone valued at $1,000 and proceeds from his sales, estimated at $1,000, which together amounted to a total of $6,000. The thieves thereafter fled the scene on beach cruiser bicycles.

When Amandala spoke to Castro, he told us that this was the first time he has been robbed. He revealed that almost fifteen minutes before the robbery unfolded, a former employee whom he had terminated for dishonesty a month ago had stopped in and asked for food. After being told that no food was left, he left the premises.

That former employee, Castro believes, is the chief conspirator of the robbery, because, oddly, Castro had not seen the employee since the termination until Friday, minutes before the robbery.

ACP Chester Williams told Amandala on Saturday that no one has been detained or charged as yet in connection with the robbery, but that there is sufficient information available to lead to the arrests of the robbers.

According to Castro, following that incident, he is considering new security measures.