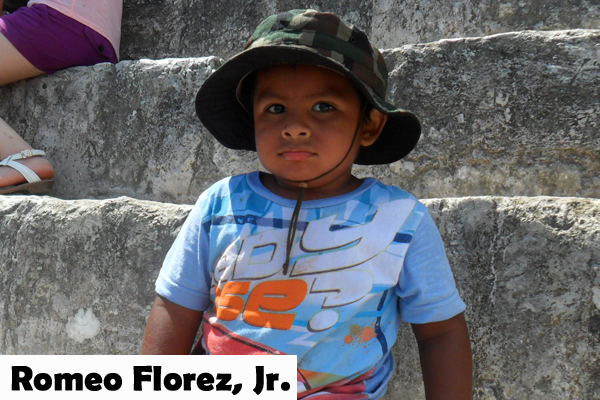 He was knocked down in rural Belize while crossing the street; his cousin was fatally knocked down 3 weeks ago

A recent spike in traffic incidents in rural Belize over the past few weeks has left a number of people either injured or deceased, and this past weekend, there were a few more accidents to add to that tally – including one involving a 3-year-old child who is presently in a critical condition at the Karl Heusner Memorial Hospital in Belize City.

Amandala has confirmed that Romeo Florez, Jr., 3, was knocked down by a passenger bus on Sunday, March 23, in front of the Adventist Church in the village of Scotland Half Moon, which is located between the villages of Burrell Boom and Bermudian Landing.

Today, we spoke to Rural Executive Officer, ASP Chris Noble, who outlined what happened. Noble said that, based on what they’ve been informed, the child was hit by a passenger bus which was travelling toward one of the villages. ”We are looking into it and we are asking persons who were on the bus or who may have seen to come forward and report it to the Burrell Boom police, the Bermudian Landing police or the Ladyville Police Station,” said Noble.

Amandala also managed to get in contact with the child’s father, Romeo Florez, Sr., and he gave us his first-hand version of the horrible incident, explaining that his son was attempting to cross the road to meet him when the unfortunate incident took place.

Florez, Sr., stated that he and his family had just left from the Adventist Church where they had gone to attend the day’s services, and at the time, his son was sitting in a van that was parked across the street.

He explained that when Romeo, Jr., saw him coming out of the churchyard, he ran out onto oncoming traffic to meet his father, without noticing that a passenger bus was coming at the same time.

Florez, Sr., told us that his son spotted the bus, but by that time, it was too late for him to turn back, and he was hit and landed almost 40 feet away, subsequently suffering a fractured skull, a broken right arm, broken right leg, and a broken pelvis.

In addition to those injuries, the father said, his son is also currently suffering from a ruptured liver and internal bleeding that has left him in a critical condition at the KHMH.

According to Florez, Sr., the family – who lives in Buttercup – is really distraught and saddened by the incident, especially since they recently lost a loved one under similar circumstances just a few weeks ago. They are all hoping for the best at this point, and are praying for a full recovery for Romeo Florez, Jr.

Amandala understands that Florez, Jr. is the cousin of Earl Ismael Flores, 13, who was the victim of an alleged hit-and-run accident that occurred on the Burrell Boom Road on February 23, and who died two weeks later while receiving treatment.

That incident is still being investigated by the Ladyville police.