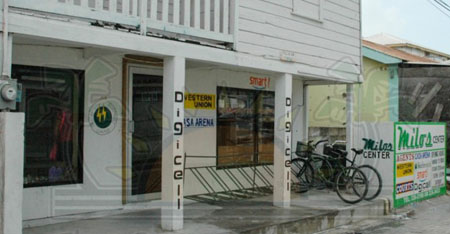 SAN PEDRO-  A security officer from the DFC area of San Pedro Town was stabbed during a daring afternoon jacking by a pair of robbers while en route to making a bank deposit at around 1:30 p.m. yesterday in downtown San Pedro.

The robbery occurred at the corner of Barrier Reef Drive and Caribeña Street when Cleofosio Robert Assi, 28, a security officer who is employed at Milo’s Center in San Pedro, was reportedly accosted by two armed culprits, one of whom stabbed him in the right shoulder, while the other wrested a deposit bag with what police have now confirmed to be more than BZ$39,000, after which they both fled toward the beach on foot.

Assi told police that he had been transporting the deposit bag with the money – which were the proceeds of Belize Electricity Limited (BEL) payments from a Western Union office located inside Milo’s Center, which also operates as a collection agency for BEL and other companies – inside a backpack, but upon reaching in front of a store near the bank, he suddenly felt someone grab the backpack, after which a struggle ensued between him and two thieves, one of whom stabbed him.

Milo Paz, the proprietor of Milo’s Center, who spoke to the media on Tuesday after the incident, said that Assi was on his way to make a routine money deposit at the Belize Bank San Pedro Branch via bicycle when two assailants, one of whom was later detained by residents, pounced on the unsuspecting guard and wounded him before making off with a deposit bag containing BZ$39,355.75 in cash.

The culprits then ran southwards towards the beach, while the security guard, who was not gravely injured, followed closely behind, yelling for help.

Paz indicated that at that time, a group of residents who witnessed the holdup set chase behind the robbers, one of whom was eventually captured in the area of Central Park.

Amandala was told that the situation took a major twist because there was a scuffle between the robber and a few of his civilian captors, during which the deposit bag was ripped apart. Money literally flew in the air and on the street, which caused a feverish “free-for-all” in which the thief’s captors and a crowd of onlookers, including park vendors, reportedly proceeded to help themselves to the thousands of dollars that were strewn across the busy street.

We were told that while that animated episode was taking place, the robber saw an opportunity to escape and slipped away from the scene.

According to police, several persons have since been detained in connection with the robbery; however, the main suspect is believed to have already escaped from the island.

Authorities also said that an undisclosed amount of the money, a portion of which had already made its way to nearby Caye Caulker, was recovered by reviewing security footage which reportedly showed the bystanders scooping up the loose cash and dashing off, and that an investigation is being conducted to see if past or present employees of the establishment may be implicated.

While initial reports were that the stolen loot was within a $130,000 range, an official police report which was issued today stated that a total of $39,655.75 was stolen, and that Assi was able to identify one of the culprits as a brown-complexioned man with dreadlocks and a bearded chin.

Assi, who is currently recuperating from what we were told was a superficial wound, was taken to the Dr. Otto Rodriguez San Pedro Polyclinic II, where he received medical treatment and has since been released.

While police have identified and are seeking the main suspect, we understand that no charges have yet been filed against any of the individuals in custody because the investigation is still ongoing.