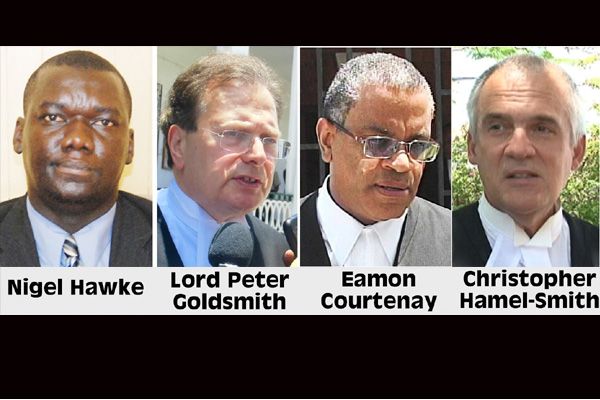 Closing arguments for UNIBAM were presented today by Christopher Hamel-Smith

The highly anticipated case between Caleb Orozco and the Attorney General began on Tuesday, May 7, 2013, before Chief Justice Kenneth Benjamin. The days-long trial is a landmark one for the nation, as Orozco is challenging both the laws of the court and the mores of the society.

Orozco’s case is an effort to strike down Section 53 of the criminal code which criminalizes sexual intercourse between persons of the same sex.

His arguments are that the law degrades and criminalizes what a person does in the privacy of his or her home. It is being argued that the law thus infringes on his constitutional rights – his right to privacy and human dignity.

The case involves several interested parties, including the Commonwealth Lawyers Association, Human Dignity Trust, the International Commission of Jurists, and the United Belize Advocacy Movement (UNIBAM), which are all supporters of Orozco’s claim. The other interested parties, which have attached themselves to the Government’s claim, are the Roman Catholic Churches, The Belize Churches of England’s corporate body, and the Belize Evangelical Association of Churches.

The first two days of the trial were dominated by the claimant’s [Orozco] attorneys, led by Senior Counsel Christopher Hamel-Smith.

Hamel-Smith argued that all their claims are consistent with the Constitution. However, in regards to Section 53, Hamel-Smith said that the law categorizes Orozco as a criminal because he is a homosexual. His sexual activities are considered carnal according to the law.

Hamel-Smith said that the direct effect of Section 53 is that Orozco must make “an intolerable choice – which no citizen should ever have to make – to live as a law-abiding citizen by suppressing his sexuality, or abandon all hope of ever living as a law-abiding citizen”. He added that such a decision puts all other homosexual minorities at a disadvantage.

The closing argument for the claimant was delivered on Wednesday, May 8, by Queen’s Counsel Lord Peter Goldsmith.

Goldsmith elaborated on the arguments presented by Hamel-Smith and presented points of his own to strengthen those previous arguments. He said that the right to privacy is a fundamental right and the interested parties on the claimant’s side are advocating for justice to be served and the claimant to be granted his rights.

The Attorney General is being represented by Crown Counsel Nigel Hawke, who began to present his arguments today, Thursday.

He explained that sexual orientation is not expressed in the constitution of Belize. He added that he does not see how having same-sex intercourse in the privacy of one’s home is a fundamental right. The right for two males to engage in sodomy is tied in with respect for privacy, but he questioned the claimant’s argument that Section 53 violates his right to privacy.

Hawke further added that the Belizean people, through Parliament, should be the ones to determine Belize’s moral code and what social policies should be accepted and denied.

Eamon Courtenay, representing the churches, reiterated the points made by Hawke and said the case was misconceived from the very beginning, as several parts of the claimant’s submission were not explained.

Courtenay added that Orozco is not qualified to bring any case to the court as he has never been arrested or charged under Section 53. He said that Orozco needs to present to the court proof that he is being prosecuted for his acts and then he might have a case. If not, then his claims are invalid.

He said that the remedy of the matter should not be sought in the court, but should be taken to the House of Representatives or legislature. He added that it is fundamentally misconceived and unlawful for the claimant to ask the court to make a ruling on a personal matter.

Courtenay will conclude his arguments on Friday.

As the days roll by and the attorneys for both sides present their arguments, the involved parties and the public have been participating in rallies, polling, silent protests, or just sitting in the courtroom all in support of their stance on the matter.

Whether Belizeans are in support of human rights and freedom, or in support of their religious beliefs, or just insisting on upholding their moral values, the case of Orozco v. Attorney General has the nation of Belize on edge as the outcome of the court’s decision is waited upon.