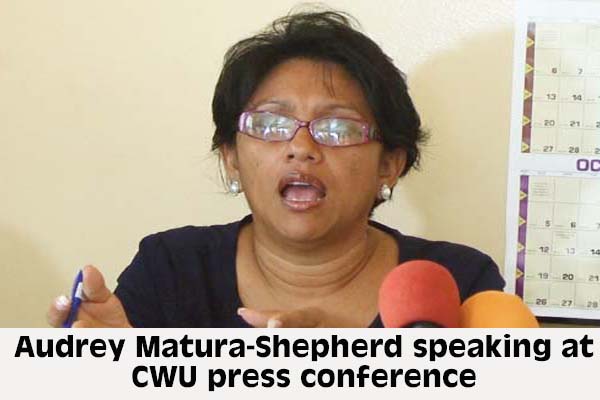 The contract to provide security services has now been awarded to the Council’s Security Manager, Hiram Longsworth, and a verbal promise was made, at the time the termination notices were issued, for all the terminated employees to be re-hired by Longsworth.

The former CitCo employees claim that they were not properly informed about the resolution, and therefore they must now find other ways to “put bread on the table,” since they have been abruptly terminated.

Since then, the Christian Workers’ Union (CWU) and its firebrand president, attorney Audrey Matura-Shepherd, have sought to intercede on behalf of the security officers who, the CWU contends, have been wrongfully terminated.

Yesterday, the CWU issued a public call to Labor Commissioner Ivan Williams for him to intervene to protect the labor rights of the security officers.

Today, the president of the Christian Workers’ Union and a few of the terminated security officers held a press conference at the CWU headquarters in Belize City to publicize the matter, which Matura-Shepherd described as uncalled for, due to the circumstances surrounding their termination.

Matura-Shepherd mentioned that the City Council did not properly notify the security officers, nor did they follow the appropriate, lawful protocol in the manner in which they went about communicating and executing their intentions to alter the Council’s source of security services.

According to the CWU, the 36 security officers were issued with their termination letters last Wednesday, January 22, which would be one day before they were officially told – for the first time – that City Hall’s Security Department is being privatized.

In a press release that was issued yesterday, the CWU stated that the termination letters were dated January 16, 2014, which, according to the union, constitutes a misrepresentation of when the security officers actually found out about their termination.

The union also notified that they have sent two letters to Mayor Darrell Bradley, because they believe that the Belize City Council is in direct violation of the Labor Laws of Belize.

The redundancies will take effect tomorrow, Friday, January 31, 2014, and to date, the employees maintain that nothing has been given in writing to them or the CWU, indicating which workers – if any – will be re-employed, and what terms – if any – have been negotiated by the Mayor.

The CWU, in their release yesterday, said “This is a most critical point, seeing that it is impossible for any privatized firm to take on all these workers at their current measly pay and still reduce expense by approximately 50 percent.”

The Mayor – who is presently out of the country – has not yet officially responded to the CWU regarding the discrepancies in the termination letters.

According to the CWU president, the union stands ready to dialogue with Mayor Bradley, since they need to find a quick solution which will be in the best interest of the terminated employees; however, she claims, the Mayor has been “dismissive” of the union’s concerns, and therefore, no progress has yet been made with regards to this issue.

Amandala has since made attempts to contact the City Council’s Public Relations Officer, Kenny Morgan, or its Security Manager, Hiram Longsworth, in order to get their comments, but we were told that neither of them was available at the time.

Facebook
Twitter
Pinterest
WhatsApp
Print
Previous articleImportation/exportation of goods between Belize and Mexico suspended
Next articleRight to the Point: It is wrong, it is distasteful… and it is CORRUPTION!