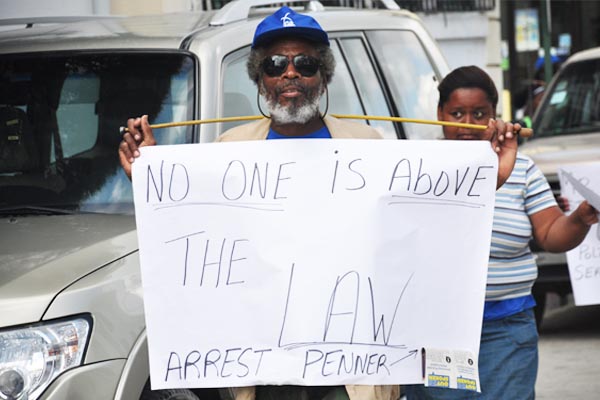 The Commissioner’s lack of action in the immigration matter was “unreasonable, irrational and unlawful.” – Chief Justice Kenneth Benjamin

Chief Justice Kenneth Benjamin today ordered the Commissioner of Police to “accelerate and conclude” the police’s criminal investigation of the former Minister of State Elvin Penner and all others who had a role in the illegal issuance of a Belize passport and nationality certificate to the South Korean Won Hong Kim.

Opposition Leader Hon. Francis Fonseca had filed for a judicial review seeking the court’s intervention to issue a writ of mandamus to Commissioner of Police Allen Whylie for him to investigate, and if possible, charge Elvin Penner criminally for violations of the Belize Passport Act and Belize Nationality Act.

Belize’s Deputy Solicitor General, Nigel Hawke, is expected to today tell his client, Commissioner of Police Allen Whylie, that Chief Justice Kenneth Benjamin has ordered that he accelerate and conclude investigations into the role of Penner in the issuance of the Belize passport to Won Hong Kim, a man who had never set foot in Belize, and who was, furthermore, imprisoned in a Taiwan jail at the time he was supposedly in Belize, being taken to the Nationality and Immigration offices by the Hon. Penner to process his nationality papers.

In his ruling to grant the court’s prerogative writ of mandamus, the Chief Justice said it was “an exceptional state of affairs which warrants the intervention of the court.”

In granting the relief sought by the Leader of the Opposition, the court agreed that the Commissioner’s lack of action in the immigration matter was “unreasonable, irrational and unlawful.”

C.J. Benjamin also noted that Commissioner Whylie made no reference to the claimant’s (Fonseca’s) letter in his affidavit, in responding to the claim.

But the smoking gun which apparently contributed significantly to today’s decision came from a leaked memorandum that Director of Public Prosecutions Cheryl-Lynn Vidal wrote to the Head of National Crime Investigation Branch on February 20.

“The memorandum,” the Chief Justice said, “contradicts the Commissioner’s assertion that no investigation was launched.”

Benjamin also noted: “No attempt was made to deny the existence or the authenticity of the DPP’s memorandum.”

On Wednesday, February 26, attorneys for the Leader of the Opposition had argued successfully before the Chief Justice for leave to apply for judicial review, seeking the specific remedy of a writ of mandamus that would compel ComPol Whylie to criminally investigate Penner and others for their role in the Won Hong Kim passport scandal.

Fonseca’s lead attorney Edwin Flowers, S.C, from the law firm of Musa and Balderamos, told the court that they had written to Whylie on or around February 7, listing the legal reasons why he should investigate Penner.

Whylie, however, had simply ignored the letter, he said, and they needed the writ of mandamus urgently because the statute of limitations on criminal charges against Penner under the Summary Jurisdiction Act was about to expire.

By the evening of Thursday, February 27, court papers had been served on Whylie. He in turn had submitted his affidavit, and on Friday, February 28, the claim was heard in the courtroom of Chief Justice Benjamin, with both sides making submissions. Benjamin had reserved his judgment for today, Monday.

Around 9:00 a.m. on Friday, protesters from the Opposition PUP had converged on the area between Battlefield Park, Regent Street, and the Supreme Court on Treasury Lane in support of their leader, whose judicial review against the Commissioner was scheduled to be heard in the Chief Justice’s courtroom at 10:00 a.m.

Shortly after 10:00 a.m., a court official ordered the court’s policemen to disperse the crowd that had gathered in front of the Magistrate’s Court on Regent Street, but not before Fonseca had the opportunity to join his supporters, in singing the National Anthem before he went into court.

Following submissions on Wednesday, the Chief Justice agreed to hear the fix date claim Friday, one of the speediest judicial reviews that the court has entertained so far, because the statutory of limitation period for the two offenses cited in the judicial review application was fast approaching. The statute of limitation for the offense against the Belize Passport Act expires today, Monday, March 3, while the statute of limitation for the cited offense against the Belize Nationality Act expires on March 9.

The hearing opened on Friday with Fonseca’s attorney Edwin Flowers, S.C., introducing attorney Fred Lumor, S.C., who appeared on behalf of DPP Vidal, who was named as a party of interest in Fonseca’s application for judicial review, seeking a writ of mandamus against Commissioner Whylie.

Commissioner Whylie, decked out in his uniform, arrived at 10:34 a.m., when Lumor was almost finished with his arguments to the court to have the DPP struck out from the claim as an interested party.

Lumor told the Chief Justice “that there is nothing in the court’s order directed at the DPP or the interested party.”

“A pretrial protocol letter should have been sent,” Lumor submitted.

In responding to Lumor, Flowers said, “the DPP was made an interested party because of the constitutional position.”

He added: “I cannot further pursue an argument that she remain.”

C.J. Benjamin granted the application and ruled: “It is ordered that the DPP be struck from the claim.”

Flowers then began his submission, telling the court that the Leader of the Opposition has a sworn duty to uphold the laws of Belize and that the Commissioner of Police has a duty under Section 4 of the Police Act to investigate and arrest offenders.

“The reasons offered for the refusal [to investigate Penner] are unreasonable, irrational, and unlawful, contrary to the legislative intent of the Police Act,” Flowers submitted.

Flowers also reminded the court about the public statements, which are detailed in the application for judicial review, that Prime Minister Dean Barrow and Minister of Immigration Godwin Hulse made in reference to the Penner passport scandal.

He also made reference to the October 7, 2013, interview that Commissioner Whylie gave to the media, famously saying that he was out of the country and had not heard the news about the passport scandal.

The DPP’s appearance on Channel 5’s morning show Open Your Eyes, during which she said, “I think there is sufficient [evidence] to warrant an investigation,” was also cited to buttress the Opposition Leader’s claim.

But the most compelling piece of evidence against the Commissioner and his refusal to investigate and charge Elvin Penner, the disgraced former Minister of State with responsibility for Immigration, was the memorandum from the Director of Public Prosecutions to the Head, National Crimes Investigation Branch.

The memorandum, dated February 20, 2014, and stamped “confidential,” was leaked to the media, and it pointed to the fact that the police had indeed already begun an investigation, which was then aborted upon “instructions.”

“I would be most grateful if the officer were to indicate the source of these ‘instructions,’ and if in fact it simply means that no further investigation will ever be done in relation to the issue,” said the DPP’s memorandum.

The memorandum also pointed to the fact that the immigration files that were supposed to contain the evidence that the DPP needed for a proper evaluation to advise the police, were not forwarded to her, leaving her to conclude in her memorandum: “The information on file suggests that the offenses may have been committed at the Immigration Department. I am unable to advise further, since no files have been forwarded and the investigation, in relation to that issue at least, according to the officer’s own words, was halted.”

Deputy Solicitor General Nigel Hawke, who defended Whylie, argued that, “the Commissioner of Police has acted. He exercised his discretion of not acting in the way the claimant is expecting.”

Hawke further submitted that, “The application of the claimant in this matter is wholly misconceived.”

In a brief reply to Hawke’s submission, Flowers said the Commissioner of Police does owe a duty to enforce the law.

“The Commissioner of Police, my learned friend says, has discretion not to investigate. But he did investigate, reference the DPP’s memorandum,” Flowers concluded.

According to another one of Fonseca’s attorneys, Kareem Musa, if the Commissioner fails to carry out the court’s order, he can be cited for contempt of court.

Musa also said that the statute of limitation period is not that important anymore, because the two offences that they have pinpointed are already before the court. He was referring to the private lawsuit filed on Friday in the Belmopan Magistrate’s Court by Citizens Organized for Liberty through Action (COLA).

The police’s investigation may very well work in the favor of the private lawsuit, Musa explained.

Following the court ruling, Leader of the Opposition Fonseca spoke to reporters saying that today’s Supreme Court ruling was a victory for the people of Belize, because the Chief Justice had issued a ruling ordering the Commissioner of Police that an investigation, if it had been started, must be completed.

“The C.J. has, of course, tempered our own order that we sought, saying that he cannot compel the Commissioner, in respect of the specifics of the investigation. We had asked that the Commissioner take statements from the Prime Minister and the Minister of Immigration, Mr. Elvin Penner, and other interested parties. The Chief Justice did not go that far, but it is a clear victory for us. It is a clear victory for the people of Belize,” Fonseca said.

“The court has said to the Commissioner of Police, ‘you cannot exercise your discretion to ignore this serious matter. You must investigate this matter and you must do so within a timely manner’,” Fonseca explained.

Commissioner Whylie, who has maintained a stony silence ever since the issue came up, continued to avoid reporters’ questions. Upon exiting the courtroom Friday afternoon, Whylie would only say “I have no comment” as he hustled pass reporters and cameramen. Whylie did not appear in court today to hear the Chief Justice’s ruling.