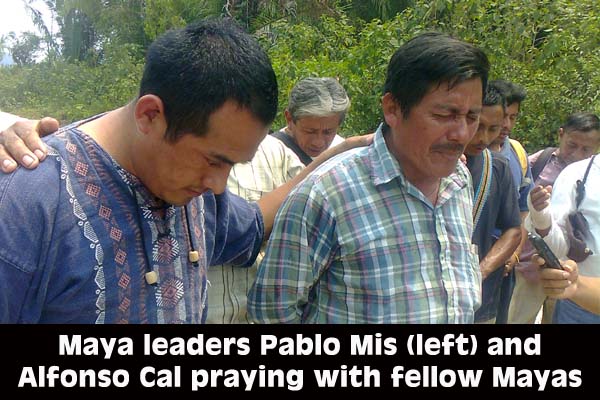 Maya leaders and their communities descend on US Capital drill site

Unity, solidarity and determination reigned, but tensions were high nonetheless within the confines of the majestic Sarstoon Temash National Park on this Labor Day holiday as a crowd of agitated Maya leaders, village chairmen, alcaldes and concerned villagers from the buffer communities in southern Belize gathered at the entranceway to US Capital Energy’s A1 Drill Site – which is located about 10 meters inside the national park – demanding to be given access to what they reiterated was their communal lands.

The Mayan communities were up in arms particularly because yesterday, despite prior court rulings declaring their rights to those same communal lands, Chief Forest Officer Wilber Sabido and National Parks Administrator, Hannah St. Luce-Martinez, signed a waiver on the expiration date of the oil exploration permit which grants the oil company entry into the protected area. A little over a hundred representatives from 38 Mayan communities in the vicinity decided to take a stand and make a statement today by setting foot on what they believe to be their lands in accordance with the court’s rulings.

Before heading to the drill site’s entrance, though, the group assembled and strategized in the nearby village of Sunday Wood, one of the five buffer communities which acts as an access point to US Capital Energy’s pre-drilling operations in the area, where Amandala conducted a quick interview with Christina Coc, the spokesperson for the Maya Leaders Alliance (MLA) and the Toledo Alcaldes Association (TAA), who outlined the plan and the reason for the move.

She said, “The oil exploration permit for US Capital expired yesterday and this is the beginning of what we intend to have as physical resistance to the violations of the rights to our land and our resources. Our community leaders are going to make a statement and walk on our lands because we know that those lands are ours and we do not feel or think we need permission to walk on Maya lands. We have long been passive, humble and patient people and we have followed the law but the Government is demonstrating that it won’t follow the law so what do you expect the company to do. It will manipulate, coerce and bribe to get access to our land.

“None of us have said that oil should not be explored, but if it is not planned and well-contracted then there is no guarantee that our people will benefit. We’re not here to create violence, but we are here to ensure that in the next 25 years, our children will have a safe place to live and benefit in one way or the other from third parties who want to come and just take our resources. We will not stand here and let them take our resources without ensuring that our children are being thought of.”

Thereafter, a caravan of residents from the Mayan buffer communities made their way to the drill site where they were braced at the entranceway by a handful of police officers including the Deputy Officer in Charge of Punta Gorda Police, Inspector Ernel Dominguez, and representatives from US Capital Energy headed by Dr. Michael Tewes, the Health, Safety and Environmental Manager for US Capital Energy’s A1 drill site.

A standoff soon ensued after Pablo Mis, Program Coordinator for the Maya Leaders Alliance, indicated that the group wanted to go into the drilling area unimpeded, since they do not need permission and do not want anyone to accompany them on their lands.

“The community members want to join the alcaldes and the chairmen that’s here; the purpose is to go and see what’s happening out there because this is Maya lands and we want to be able to enter,” Mis explained.

However, Tewes replied, “The company has always invited any village leader who would like to come in to visit the site to please get in touch with us, let us know your desire that you want to visit and we would facilitate the visit. We have no problem to let any alcalde or chairman to come in, but we cannot have all this crowd go back there and be walking around. It is unsafe. This is a big crowd of people; we can’t deal with the security of this crowd.”

That back and forth went on for some time and soon enough, Inspector Dominguez intervened and cautioned Mis about the group’s intentions.

“The oil company representative is saying that you did not go through the proper process to have this visit done today. If you did not go through that proper process, then you are giving people the reason to want to oppose on what you are doing or to create problems on the other side. Besides all these people here, I will hold you accountable for anything that should go out of the ordinary,” warned Dominguez.

At that time, SATIIM’s executive director, firebrand Greg Ch’oc, suddenly appeared almost from nowhere and declared that there was no need for negotiations because there are other ways to enter the park, even adding that boatloads of people are on the verge of invading the park as well.

That prompted further invigoration of the crowd who sided with their leaders in a firm resolve to conduct vigorous monitoring of every detail of US Capital Energy’s activities.

“We did not ask the Forest Department for permission to be here. The 2010 judgment and the 2013 Court of Appeals’ decision said that this is Maya land. So it’s a matter of courtesy that we inform the Forest Department and now we are being very courteous in also asking the company. Mr. Dominguez, are you speaking on behalf of the Government of Belize and the oil company expressing that the government is exercising a compulsory acquisition of Maya land? And are you preventing Maya people from walking on their land?” questioned Mis.

When the crowd was then told that they weren’t being physically restrained from entering, they immediately crossed over the chain link barricade and barged onto the rock-strewn road leading to the drill site which is actually located 7 miles along that stretch of road.

A couple yards into their journey, the men, women and children stopped along the road and congregated in a symbolic gathering designed to unite their thoughts, actions and spirits through prayer.

Spine-tingling emotions could be felt strongly in the air as rows of tears steadily streamed from their eyes while they all prayed lengthily in their native language seeking moral and spiritual guidance to find an amicable resolution to their plight.

That was followed by a few speeches from their leaders who reassured their people that they are not going down without a fight – a fight for rights which Christina Coc affirmed that the indigenous Maya of southern Belize are willing to die for, even if it is at the hands of US Capital Energy.

“This is our land. We do not need a court to tell us. We do not need the politicians to accept or to agree with us. We were born here, we were raised here, we eat off this land, we will die on this land and if it is at the hands of US Capital, we will do so,” Coc concluded.

Greg Ch’oc also spoke out, stating that numerous attempts have been made to silence him; however, he is unfazed.

“There have been many attempts to silence me, and I want the world to know that I am no leader. I am just a messenger. The message of dignity and equality, of a right to life and not to be discriminated against is in the hearts and minds of every Mayan community. So, it doesn’t matter what happens to me because the message resonates in all the indigenous people and that will never be broken by GOB or US Capital”, Ch’oc stated.

“From today henceforth, there will be a rigorous monitoring of US Capital’s activities because we will not allow a breach of our constitutional rights. You cannot be saying you are acting in good faith when you are allowing the company to do what they want. They [GOB] want to consult [with us] but yet allow US Capital to continue with the activity. That’s not good faith – that could never be good faith. A rational person will never conclude that to be good faith”, he cited.

After that session, one of the leaders suggested that they continue on the journey to the drill site, after which the undeterred set of trekkers started the 7-mile trek.

While on their journey, Dr. Tewes permitted the bus in which the villagers had come to take them to the drill site – which is still under construction – although the passengers could not leave the bus to do any closer inspections.