Clock ticking for US Capital’s oil exploration work in Toledo 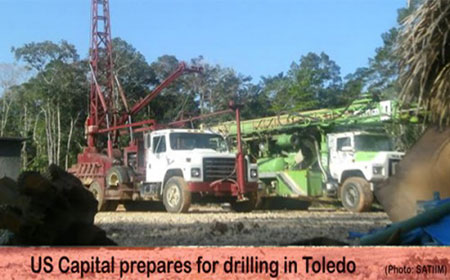 BELIZE CITY, Mon. July 13, 2015–In April, we told you that US Capital Energy, the company which has a petroleum concession to drill for oil in Toledo, had decided to abandon its first well inside the Sarstoon Temash National Park after dangerous levels of potentially hazardous hydrogen sulfide were encountered. US Capital Energy’s country representative, Alistair King, had told us that the company may proceed to drill a second well; however, they would have to first meet with Government officials before investors decide the way forward.

We learned from King today that a decision has still not been made, since the company is currently doing technical assessments on its exploratory work to date, after which a final decision will be taken.

However, King said that the production sharing agreement, granted in 2008, gives them until January 22, 2016, less than 6 months more, to explore for oil, although their permit to enter the national park won’t expire at least until next April.

If they fail to declare a commercial find before next January, that could be the end of the road for them, but if they do, they would have 25 years to develop the oil field.

King said that a second well is ready to go, if US Capital so decides, and there is an oil rig available in- country to jumpstart the process.

As we reported back in April, the company believes that a second hole could be drilled only 15 feet away from the first well, on the same drill pad, located inside the park.

King had told our newspaper that US Capital’s investment in the first well has been roughly US$22 million, and he estimated that US Capital had so far spent US$40 million on oil exploration activities, including preliminary work such as seismic testing in southern Belize.