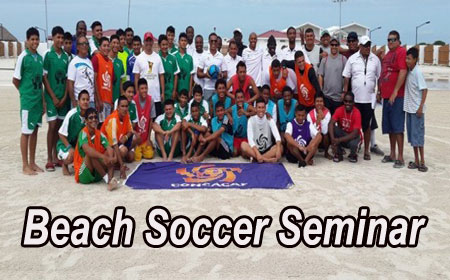 SAN PEDRO–Representatives from the Confederation of North, Central American and Caribbean Association Football (CONCACAF) are in Belize for a four-day training seminar on beach soccer for coaches and players that was held in San Pedro Town today.

The seminar was aimed at preparing Belize to participate for the first time in upcoming Central American Football Union (UNCAF) Beach Soccer Tournament to be held in El Salvador from Wednesday, November 12, to Monday, November 17.

The Beach Soccer Seminar, which included theory and practical training, incorporated the participation of several football players, coaches and sports coordinators, including the President of the Football Federation of Belize (FFB), Ruperto Vicente.

San Pedro has been chosen as the headquarters of beach soccer in Belize, and in the coming week, a national team will be selected to represent Belize at UNCAF Beach Soccer Tournament with hopes of qualifying for the 2015 CONCACAF Beach Soccer Championships.

Belize is scheduled to open the tournament against El Salvador on Wednesday, November 12.