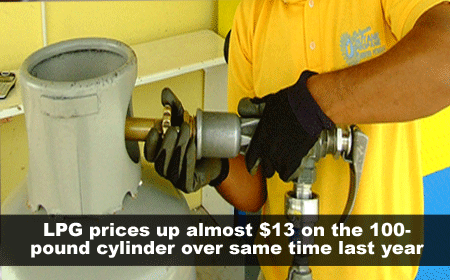 BELIZE CITY, Thurs. Oct. 26, 2017–Escalating transport costs continue to drive up consumer prices for goods and services, which rose by 0.7% in September 2017 and 1.2% for the first 9 months of 2017, according to the latest information released by the Statistical Institute of Belize (SIB).

“The ‘Transport’ index remained the main contributor to the overall rise in consumer prices during the month, recording an average increase of 6.6 percent compared to September 2016,” the SIB explained.

It explained that higher international airfares coupled with the effects of last year’s increase in domestic bus fares contributed significantly to this rise in transport costs.

Notable increases in pump prices also contributed to the rise in transport costs.

The SIB said that, “…prices within the ‘Fuels and Lubricants’ category saw a 5 percent increase with prices rising across all fuel types.”

Meanwhile, the price of cooking fuel — Liquefied Petroleum Gas (LPG), which has been trending upwards since the start of this year, recorded a 14.7% increase, with the average cost of a 100-pound cylinder increasing from $86.32 in September 2016 to $99.02 in September of 2017.

This was reflected in the second category which recorded a substantial increase: ‘Housing, Water, Electricity, Gas and Other Fuels’.

“During the month of September 2017 home rental prices were 0.4 percent higher than they were in the same month of 2016. This was almost entirely attributable to an increase in rental prices in Dangriga, as virtually all other municipalities saw some decreases in rent compared to last September,” the SIB said.

The data revealed that across the seven municipalities for which prices were collected, “Dangriga continued to experience the highest rate of increase in consumer prices.”

The converse was true for Orange Walk Town, where average rent prices were down compared to last September.