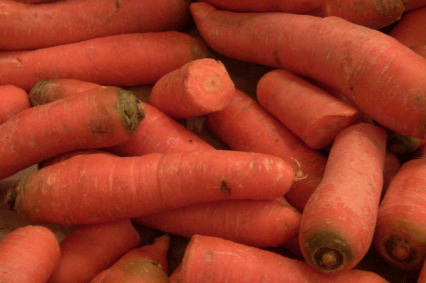 SAN CARLOS, Orange Walk, Mon. Jan. 11, 2016–Orange Walk carrot producers stand to lose tens of thousands of dollars because their locally grown produce is being boxed out of the market by imported carrots, which have flooded stalls and stores around the country, allegedly due to oversupply caused by contrabandistas.

Roberto Harrison, Chief Agriculture Officer, who conceded that there could be an increase in contraband carrots on the Belize market, told our newspaper that the last permit for the importation of carrots was given in the latter part of December—but that was only for 3,000 pounds of carrots and so there should not be an oversupply of imported carrots on the market.
Media reports indicate that $30,000 worth of carrots could be lost and two-thirds ($20,000 worth) is already rotting in the fields.

CTV3 in Orange Walk reported last week that 15 farmers of San Carlos Village, Orange Walk District, have been unable to sell their carrots. According to 7News, 10 acres of carrots worth $20,000 dollars are wasting in the fields.

Ignacio Perez, a farmer of San Carlos, told Amandala that the local carrots are sold at a wholesale price of $25 to $30 for the 50-pound sack, and he was only able to sell 20 of his 50 sacks.

The Ministry of Agriculture, Fisheries, Forestry, the Environment and Sustainable Development, which issued a press release last week, assured the public that, “The current problem… is being thoroughly examined to determine the cause, the impact and corrective measures necessary.”

The release went on to say that the “importation of fresh vegetables” is vital in order to “supplement” the locally produced carrots, since the local carrots are seasonal.

Harrison informed us that the season commences mid-December and ends in March. It is only outside of this period that carrots are to be imported.

The Government says that carrots are imported in a strategic way to ensure that there is neither scarcity nor saturation on the local market.

It went on to say that typically, at the beginning or end of the harvest, local, imported and contraband carrots can be found on the local market, which adds to the difficulty of managing the supply.

The Ministry ended by apologizing for “any loss of production, especially to small farmers.”

No indication was given to us whether the illegally imported carrots would be confiscated.