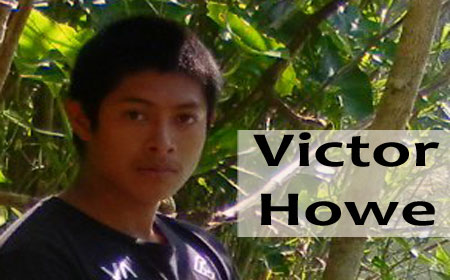 BELIZE CITY, Thurs. May 7, 2015–Ombudsman Lionel Arzu told Amandala today that he has never before received a report of police brutality in which the police have been accused of attempted sodomy against the victim.

The allegation which has come to the fore from Victor Daniel Howe, 19, seems to be unprecedented. Howe claims that a detachment of about 8 law enforcement officers—who the teenager said were dressed in green uniforms and who appeared to have been drinking—brutalized him and stood by laughing as one of their team members made a move to sodomize him in the Benque area.

Like the Ombudsman, Ret’d. Colonel George Lovell, the Chief Executive Officer in the Ministry of National Security, was deeply troubled by the allegation and both men have undertaken to look into the matter.

Howe is no stranger to us here at Amandala. Four years ago, in 2011, when he was only 15, he and his cousin, Louis Howe, then 16, alleged that they had been brutalized by one member of a 5-man team of officers, which included both Belize Defence Force and police personnel. The boys said that they were gathering water at the Mopan River, near Benque, when they were approached by the officers, who insisted they were Guatemalans. One of the officers allegedly took off his belt and lashed the teenagers.

This time, Howe told us that at about 4:20 p.m. on Monday, he was fishing alone along the banks of the Mopan River, about a 20-minute walk from his home in Benque Viejo, when the officers approached him from behind and ordered him to freeze.

Howe said that he complied, and the officers took him to a clearing in the bushes to sit down. There, he said, the officers slapped him, beat him with guns and stomped his bare feet with their boots, as they demanded that he tell them where “the marijuana is, and who is the dor,” or the point-man who controls the trade there.

Howe told Amandala that he told the police that he knew nothing of any marijuana, but they insisted that he did.

He said that one of the officers looked at another member of the team and told him of a time when he allowed a civilian whom they had held, to go free after he allowed himself to be sodomized.

Howe said that when the officer, who appeared to be in his 30s, said this, he, the officer, looked at him, the teenager, in a “funny” way, which scared him.

The officer, Howe alleged, took off his belt and sat beside him, then unbuttoned the teenager’s pants and tried to pull it down. Meanwhile, the other officers stood by laughing, Howe claimed.

He told us that the officer tried to hit him with his gun when he resisted him.

Later, he pretended that he would comply, but managed to slip away and swim across the river to safety, leaving behind his cell phone, bag and slippers.

Howe told us that he suffered scrapes, cuts and bruises as a result of having been beaten by the cops. He said that when he tried to report the matter to Benque Viejo police, they laughed at him. He told the officers that it was nothing to laugh about, but still, they took him “lightly.”

So Howe reported the matter to Samuel Bruce, head of the neighborhood watch program there. Bruce told us that just before Howe’s run-in with the cops near the river, another member of his neighborhood watch group had encountered the paramilitary cops, whom he recognized as members of the Mobile Interdiction Team (MIT), who Bruce said are funded and trained by the US Government.

Bruce said that the MIT can be recognized by their uniforms and vehicle, which Bruce said carry both the Belize and US flags. The neighborhood watch member was with his girlfriend, and the MIT questioned them, Bruce said, because, due to her youthful appearance, she seemed to be underage.

Bruce, a former member of OSAC — the US Overseas Security Council, told us that he has been assisting the police since 1991 and he has been leading the neighborhood watch program for the zone since 2008. He said that he is also a special constable.

Bruce told us that while previously the neighborhood watch group had very good working relations with the police there, and used to have monthly meetings with police, those relations have broken down in recent years – even as they are seeing a spike in crimes and escalating reports to the neighborhood watch group, 60% of which are reportedly against the police. The group also does not have good relations with the current area representative, Hon. Erwin Contreras, Bruce said.

CEO Lovell told Amandala that everyone who wears a police uniform is under the command of the Police Department and the Commissioner of Police, and they don’t report to the US Embassy. He explained that the Mobile Interdiction Team has been assigned to that area to monitor and prevent contraband activities and human and weapons trafficking, because there is a major problem in the Benque area with illicit activities. Teams may also be accompanied by Customs and Immigration personnel, Lovell said.

Amandala understands that the Professional Standards Branch, led by Supt. Noel Leal, has been apprised of Howe’s complaint, and they have also pledged to look into the matter.

When Bruce took Howe and his mother to Belmopan on Wednesday to file a complaint, they found the office closed, but Bruce said that he managed to speak by phone with Leal, who promised to send an officer to Benque Viejo on Thursday to formally document the complaint.

The Howe family were disappointed that nothing came out of their complaint about the 2011 incident, but they are hopeful that they can get justice this time around.