Cop succumbs 15 months after he was attacked by “Good Samaritan” 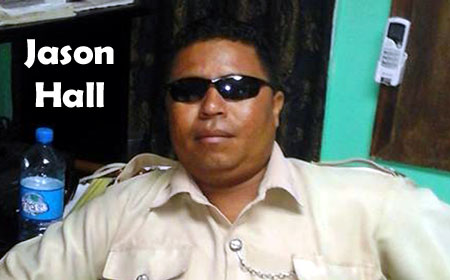 COROZAL TOWN, Tues. Sept. 20, 2016–Exemplary police constable Jason Hall, 37, of Corozal Town died after suffering for 15 months with massive injuries to his head and body after he was beaten with a piece of wood by a robber pretending to be a good Samaritan, who robbed him on the morning of June 30, 2015, on the Philip Goldson Highway in the Rhaburn Ridge area, at about Mile 37.

Hall died at his home in Corozal Town at about 6:30 this evening. We were told that before he died, he called his wife and told her that he was going to leave her, and she was at his bedside when he died.

Hall’s body was deposited at the morgue, where it will undergo a mandatory post-mortem examination to certify the cause of his death.

Hall pulled to the side of the road and began to change the wheels when a man came up and offered to help him.

A spare wheel was put on, and the “Good Samaritan” took the other damaged wheel on his bicycle, to a repair shop.

After the wheels were changed and Hall was about to get into the car, however, the man suddenly attacked Hall, beating him in the head with a piece of 2×4 wood. The thief then stole the lawman’s cellphone, valued at $450, $400 in cash and some personal documents. The thief also stole Hall’s car, which was valued at $13,500.

Hall was left bleeding and unconscious on the roadside in some bushes to die.

A driver of a vehicle that was passing by saw the injured cop, who was in uniform, and took him to the Karl Heusner Memorial Hospital, where he was declared to be in a critical condition.

After doctors attended to him, Hall was later discharged to go home to continue his recovery. We were told that he was receiving treatment frequently at his home and he was on extended leave, but things took a turn for the worse, and he died.

Police identified Hill’s attacker as Darren Gillett, 32, of Rhaburn Ridge, Belize District. Gillett was arrested and on July 5, 2015, he was taken before Chief Magistrate Anne Marie Smith on charges of attempted murder, dangerous harm, use of deadly means of harm, and harm.

The prosecution objected to bail and Gillett was remanded to the Belize Central Prison until his next court date. It is expected, however, that because Hall has succumbed to his injuries, that Gillett will be returned to court to be charged with murder for the death of the policeman.

Inspector Fitzroy Yearwood said that Hall, an old friend of his, never abused his authority and was always willing to work. They all thought that he was going to fully recover, he said, and he will be sorely missed at Precinct Three.

Arrangements have not yet been made for the burial of PC Jason Hall.