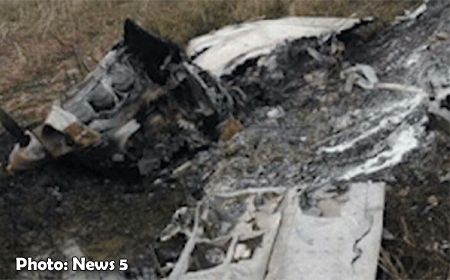 SPANISH LOOKOUT, Cayo District, Wed. Dec. 2, 2015–San Ignacio police are investigating the origins of a plane that was found completely destroyed by fire yesterday morning near a farm in the Green Hills area near Aguacate Lagoon, in Spanish Lookout.

According to police, very little is presently known about the plane, but they believe that the plane was a drug plane that was intentionally destroyed.

People in the area told police that they heard a plane circling over Spanish Lookout without lights at 1:30 yesterday morning.

At about 7:00 yesterday morning, people who were travelling in the area found the plane, already destroyed.

Police strongly suspect that the plane was used to transport drugs, most likely to neighboring Guatemala, which is not far from Aguacate Lagoon, and that the drugs had already been transferred.

The cargo was more valuable than the plane, they believe, and so the operators of the craft would have had no qualms about destroying it.

Today, Inspector Reymundo Reyes told Amandala that the investigation has begun, but inroads into the case have not yet been made.

According to police, in March 2014 another Cessna 210 plane, which had also been burned, was found, also in the Green Hills area. It was found about a mile from where this latest plane was found.

As is the case in this most recent plane discovery, the cargo the previous plane had been carrying was not found.