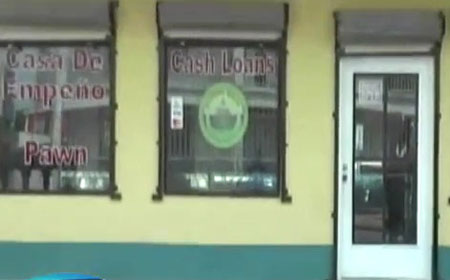 COROZAL TOWN, Corozal District, Thurs. Nov. 24, 2016–A man tried to rob the Rapidito Pawn Shop In Corozal Town at about 9:30 this morning on 4th Street, but instead of getting away with any money or valuable items, he was shot in his upper leg and escaped empty-handed.

The thief fled in a van with three other men, but they were pursued by an alert policeman who was in civilian clothes, in his private vehicle.

Quick police work led to the establishment of a roadblock, and the wounded robber and his accomplices were arrested.

The wounded man was taken to the Northern Regional Hospital, where he is receiving treatment for the injury, under police custody.

His three accomplices are in Orange Walk police custody.

The owner of the pawn shop told police that he and his security guard were in his store when a man came in with a pistol in his hand, which he pointed at them, and demanded money.

Police said that the thief fired about 10 shots into the store.

Inspector Dennis Serano, Deputy Commander of Corozal Police, said that a police officer was in the area in his private vehicle when he saw the bandit run out of the store and get into the van.

Police have not yet released much information, except to say that three of the culprits are from Belize City, including the wounded man, and the van is also from Belize City.