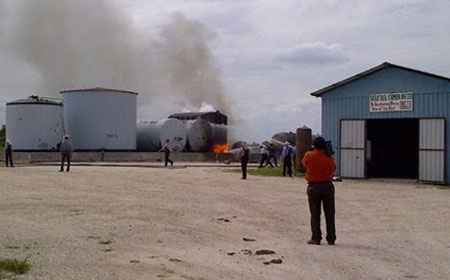 ORANGE WALK–A potentially disastrous fire started at a fuel storage facility at Shipyard in the Orange Walk District today due to a small electrical spark which led to a frightening experience and thousands of dollars in losses for the company.

Fire officials in Orange Walk said that at around 10:00 a.m., smoke was seen billowing from a crude oil refinery tank at Belfuel Company in the Camp 6 area of Shipyard, a Mennonite community in the outskirts of that municipality.

The fire that engulfed the tank, which reportedly contained about 600 gallons of crude oil, soon spread to another 600-gallon tank before moving on to a larger 10,000-gallon fuel tank, at which time firefighters from the Orange Walk Fire Service arrived on the scene to assist the employees of the facility who had been battling the blaze for some time without success.

Though crude oil is not as flammable, the firefighters had to work fast, using high pressure hoses, to control the flames, as there were containers with more flammable fuels, such as diesel and gasoline, beside the burning containers.

About a half an hour later, the fire was contained to the single tank that had initially caught fire, although the blaze raged for about two more hours before it completely subsided.

According to the officer commanding the Orange Walk Fire Station, the fire was caused by a faulty electrical switch at one of the small containers that had an electrical motor attached to a fuel pump.

He explained that there was a fuse box attached to the container, and apparently, that switchbox sparked, which ignited the fumes from the container and led to the fire.

Fortunately, no one was injured during the incident, but according to the owner of Belfuel Company, the business suffered a loss of approximately $25,000.

We understand that the refinery is one of a handful in the country which uses primitive means to convert light sweet crude oil, which is bought from Belize Natural Energy (BNE) via the Spanish Lookout oil field, into low grade diesel fuel suitable for use in heavy equipment.