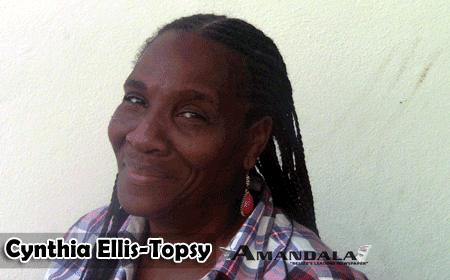 BELIZE CITY, Mon. Apr. 4, 2016–Garifuna mentor Cynthia Ellis-Topsey—who has been working with women and families since 1985—is leading a nationwide initiative through which she intends to connect underserved Garifuna youth and other Afro-descendants, with their elders to “celebrate and affirm the Garifuna contribution to this country” in sustainable development as well as education.

Ellis-Topsey, the champion of the Duke of Edinburgh Award Programme in Belize, said that youths should be part of the civic engagement that goes beyond the manipulation that is carried out by political parties, and they should be able to tell the story differently.

“Urgently, I want to give back what was given to me. I did not just appear out of a hat…. I want to see Garifuna youth at various fora: at Rotary, in environmental discussions, financial literacy – when we are talking about de-risking, banking,” she said.

Ellis-Topsey said that she wants Garifuna youth to be represented at the General Assembly of the United Nations which is due to be held in September and also in March.

“We need to be cognizant of these discussions, of the OAS, of treaties, decisions being made to be more involved and engaged in the conversation and the decision-making process,” she said.

Ellis-Topsey said that whereas youth are often featured in stories about crime and suicide, she has embarked on “an intentional paradigm shift”—one that would enable Garifuna youth to “reclaim the eminence that we once held. One of the main thrusts is, ‘think global and act local.’”

Her new self-financed initiative is called the Garifuna Youth Network – an intergenerational network which she said is just being formalized this year. Through this initiative, she hopes to engage 50 Garifuna youth in each district, starting with Stann Creek.

Ellis-Topsey pioneered the Belize Rural Women Association with Regina Martinez. She was also among the women who instituted the Belize Organization for Women and Development. Her experience in activism includes her work as CARICOM’s Deputy Programme Manager responsible for Youth, Women and Community Development in 16 countries.
“What we are doing is a celebration of elders. We’ve been having conversations with several elders for years about celebrating the contribution of Garifuna people to Belize—and particularly teachers. We built the education system of this country. We need to ensure that that is celebrated or affirmed in collaboration with agencies and individuals interested,” she said, adding that the celebration of teachers is planned for November.

She said that the focus will be on three areas: affirmation, celebration and action. A banquet, as well as an award ceremony, will focus on Garifuna elders and women.

“The youth will sit at the feet of the elders in the process of affirmation. In the area of sustainable development, we brought our food with us, we have our farms…” Ellis-Topsey said. The effort will include a series of study field trips for youth.

Her idea is for youth to sit at the feet of elders, hear their stories and learn from them and practice what they learn in areas such as food processing. This would entail visiting the farm, finding out about traditional recipes—such as the many different things that can be made from cassava.

She wants to tap into the energy and initiative of youth to identify and reclaim traditional knowledge and practices. She also wants to see the youth guided in the rigor of documentation, interviewing and creativity, which would entail taking pictures, writing articles and celebrating their successes.

She said that they are also having a discussion on gardens in schools, and the plan is to pilot the program through the Catholic schools in Dangriga, modeling it off a similar effort implemented in Santa Familia, Cayo.

Ellis-Topsey said that it is about going back to the original way of doing things.