Home Headline Death penalty will stay on our books!
Headline

Death penalty will stay on our books! 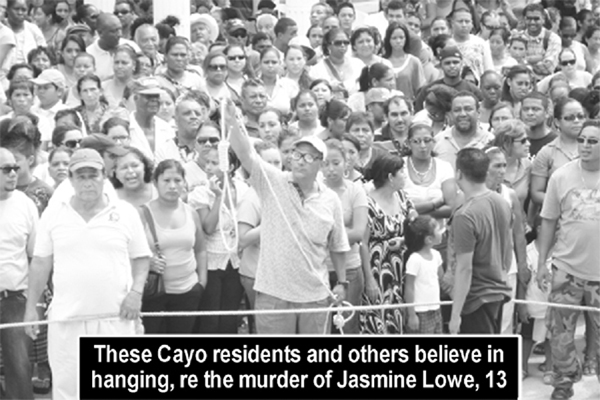 I “absolutely and completely disagree” with Human Rights Council – it “would serve as a deterrent.” – PM Barrow

The 2012 murder of Jasmine Lowe resurrected public calls for the resumption of the death penalty in Belize. The issue has been off the front burner since, but was brought to the fore last month when a UK official, speaking at the 17th Session of the Human Rights Council Working Group’s Universal Periodic Review (UPR), held in Geneva, Switzerland, called on Belize to undertake a public consultation on the complete abolition of the death penalty.

Prime Minister Dean Barrow said at a press conference Wednesday: “They’ve been on with this capital punishment thing for years now. Everybody knows that practically speaking, no judge orders execution, so it’s not happening. If they want us to take it off the books, I certainly won’t agree with them at all. I absolutely and completely disagree. I believe that capital punishment, if we were able to implement it, would serve as a deterrent, so there is no sympathy at all for that recommendation.”

Kent Bowers was the last person to be executed by the state of Belize. He was hanged in June 1985. However, the UK official said that in 2012, Belize was unable to join 111 other states in supporting a worldwide moratorium on execution as a step towards total abolition—a decision in which she said the UK was “disappointed.”

“We would not join, because we do not agree with them that capital punishment is a bad thing. We don’t,” Barrow insisted.

Both the UK and US rep at the UN meeting furthermore called on Belize to revisit a provision on its criminal code which outlaws unnatural sexual relations.

The UK called on Belize to “takes steps to remove domestic legislation that outlaw same-sex activity between consenting adults, and develop policies to address discrimination against LGBT people.”

The US rep, likewise, called on Belize to “…reform existing laws that can be used to discriminate against lesbian, gay, bisexual, and transgender persons, including the provision of ‘unnatural crime’ laws prohibiting ‘carnal intercourse against the order of nature.’”

He later made it clear what the Government’s position on the death penalty is. As for comments on the LGBT issue, Barrow was more reserved: He said that in terms of Section 53 of the Criminal Code, now the subject of a constitutional challenge in the Supreme Court, “that’s a matter that’s before the courts.”

He added that, “We cannot permit any interference with our justice system and our internal processes.”