Debbie Humes succumbs to her injuries 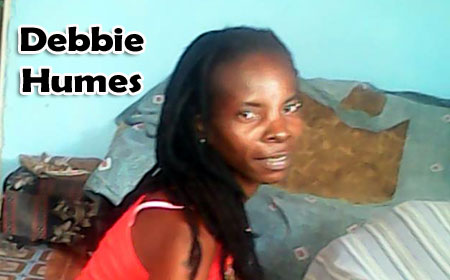 This year, however, members of the band had tears in their eyes, as they mourned the death of their fellow dancer and member, Debbie Humes, 39, of Belize City, who was killed less than 20 hours before the much-anticipated Carnival Road March 2016 when she was crushed beneath the home of Marsha Smith on Dolphin Street (the meeting spot for the band) after the house collapsed, trapping about 20 to 25 revelers under it.

The victims suffered varying degrees of injuries to their arms, heads, ankles and legs. Four were seriously injured, including Debbie Humes, a senior dancer who later died as a result of her injuries.

Marsha Smith, 49, was injured, a 15-year-old girl suffered injury to her back, and a man suffered a broken leg.

Moreover the band’s costumes, which they spent many sleepless nights perfecting, were also damaged, and a frantic effort was made to recover what they could from beneath the collapsed house. The announcement was made that the group would work all night to remake costumes and other paraphernalia for the carnival that were destroyed as a result of the collapsed house.

At about 1:00 Saturday afternoon, the band showed up in full force and in their regalia for the Carnival Road March 2016, to defend their championship. Although they were injured and in mourning, they were elegant and resolute, and still participated in the road show.

At the conclusion of the march, the judges tabulated the scores and Soca Mocah was the declared champions with 465 points, making them the 2016 Carnival Road March Champions. Taking second place was the Titans Carnival Band, with 452 points.

Although Soca Mocah is the back-to-back champion, their celebration was subdued because of the sadness. Marsha Smith said that they would gather this evening, but nothing much would be celebrated.

On Friday afternoon, less than 20 hours before the much anticipated event, after the house fell, the resolute team gathered and a tent and lights were erected in the adjacent yard and they began to work.

The calamity occurred at about 5:30 Friday evening, when the 12-foot-long, 1-flat elevated house made of lumber and metal siding gave away and came tumbling down.

At the time, besides the band members who were under the house making last-hour preparations on their costumes, Marsha Smith was cooking “mud” for the J’ouvert that was to be held later in the night.

After the house fell, a BERT ambulance and paramedics came and examined the team, and the four who were badly hurt were taken to the Karl Heusner Memorial Hospital.

Doctors tried to help them all; Marsha Smith, the teenage girl whose back was injured and the man with the broken leg were released after they were treated, but due to massive head and body injuries, Debbie Humes did not survive.

When the news emerged that Humes had died about three hours after she was taken to the hospital, the revelers began to weep.

In recounting the tragic event to us, a reveler reported that she was standing under the house with another dancer, and they were talking and adjusting costumes when Debbie Humes, who was also altering costumes, told them to go to the front, and as she was walking out from beneath the house, suddenly Humes shoved her, causing her to fall, and suddenly, the house collapsed, and as people tried to run for safety from under the collapsing house, many tripped and fell on her.

Luckily, they were not pinned down, and they were pulled out by rescuers. The reveler suffered an injury to her leg and bruises to her body.

Shortly after, a check was made, and they found that Debbie was not with them. When they looked under the house, they saw her. Rescuers cut the floor to gain entry to under the house and recovered her. The reveler said that her life was probably saved by Humes, who shoved her out of the area where the house fell.

We were told that a fire also began to burn under the house, where Smith had been cooking mud on the fire hearth. Luckily, the firemen were nearby on Racoon Street and they came quickly and put out the fire.

Smith noted that before the house collapsed, suddenly the third step from the bottom began to burn, and a shower of rain came, but the step was still burning.

Smith said that she put out the fire, after which she went under the house, which, shortly after, came down. It is not known what caused the step to burn. Smith said that it was a mystery, or perhaps even an omen.

Marsha Smith said that she is very angry because the life of her lifelong friend could have been saved if NEMO had acted to secure the house when she went to them several times to request assistance, but instead, they gave her the run-around. Smith said that on Thursday, before the house fell, she went to the NEMO office and she was told that the repairing of the house was to be carried out by the Housing Unit, and that it would have been repaired this week, but nothing happened.

She strongly believes that politics was at play, because she is considered a PUP, and she is convinced that was why nothing was being done to help her.

To make matters worse, the contractor who had elevated the house told them that the house would not fall, and so he gave them a false sense of confidence in the stability of the home.

Smith showed us a wood bolt that was screwed into the post to secure it on the cement pillar; the bolt was only about 3 inches long, when it should have been 6 to 8 inches in length.

City Councilor Philip Willoughby, Director of City Emergency Management Organization, said that the situation is non-political, that they were doing things systematically, and that Marsha Smith’s house was to be repaired this week.

Smith was further angered when Minister Edmund “Clear the Land” Castro announced in an interview on Love FM Radio that Smith and her family were warned not to stay in the house, that it had been condemned.

Smith said that this was absolutely false, that no one came to talk to her, and that she has never seen the Minister.

She said that her situation is serious, because she and her family need somewhere to stay, because the children need to go to school, and they need to be comfortable while her house is repaired.

Smith said that she had known Debbie Humes for over 30 years, and they were very good friends. Humes is scheduled to be buried on Saturday in Belize City. The entire Soca Mocah Carnival Band is expected to attend the funeral in their regalia, said Smith.

Word to Amandala today is that NEMO has told Smith that her house will be repaired this week.