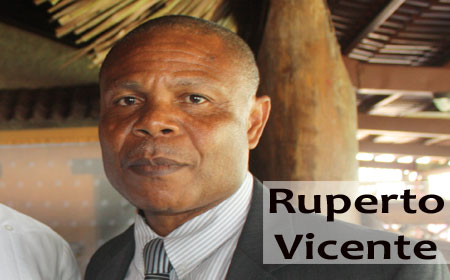 BELIZE CITY, Mon. June 19, 2017–In a Channel 5 interview last Wednesday, June 14, former FFB President Ruperto Vicente said, “I have been working for the past year. It’s been a long campaign for me, and I’ve been in communication with all the congress members…” After being sidelined following the deadlocked election vote for President on April 30, 2016, Vicente has been trying to garner support for his candidacy among the voting delegates country-wide for the upcoming June 24 election for President at the FFB 10th Ordinary Congress. First, Vicente made allegations against his opponent, Sergio Chuc, resulting in the Electoral Committee rejecting Chuc’s nomination for the post on the grounds that Chuc had crossed ethical lines in securing an unfair advantage in the election, because of his gifts to individuals who would be voting in the elections. With the strong move against Chuc’s candidacy, Vicente appeared poised to re-assume the presidency without a contest; but Chuc’s former running mate, now Acting President, Marlon Kuylen decided to throw his hat into the ring. And now, there is another attempt to smooth the road for Vicente’s return to the top post in the FFB.

Fans must bear in mind that, during his term as FFB President from 2012 to 2016, Vicente had appointed an Electoral Committee and an Appeals Committee, both of which remain in place, as no changes were within the purview of the one-year Acting President, Marlon Kuylen. Vicente had also appointed a number of directors in different areas. However, Vicente failed to appoint an Ethics Committee.

And now, with Kuylen the only obstacle, barring a boycott by enough voting members, to Vicente’s return to power, there has reportedly been a call from a few Vicente appointed directors for Kuylen to resign his post of Senior Vice President, claiming that, “Mr. Kuylen not resigning from his post is an unethical practice and puts him at an advantage over the other candidate using his office to leverage himself..” Furthermore, the group’s letter to the Electoral Committee argues that if Kuylen does not resign, this could cause a “possible gap in the Executive Committee if Mr. Kuylen wins in his bid for President.” It goes on, that this would be “subverting the proper exercise of the right of the delegates to elect all members of the Executive Committee during a duly convened congress.” And it goes even further, arguing that “Mr. Kuylen’s resignation as Senior Vice President will have the effect of removing him from the post as Acting President and consequently levelling the electoral playing field.”

Well, well, well; what have we here?! There does seem to be something fishy in what the directors’ letter purports to want to achieve.

First of all, it has never been the case at an FFB Ordinary Congress, that the President is required to resign his post before the congress is convened. Did anyone complain of President Vicente having an “unfair advantage” in the 2016 election by not resigning before-hand? While other tactics might have worked to his advantage, the incumbent President is expected to present his report card of achievements under his administration, as arguments to secure another term in office.

And then, what is this about causing a “possible gap in the Executive Committee if Mr. Kuylen wins in his bid for President,” and that such a situation would be “subverting .. the right of the delegates to elect all members of the Executive…”? Are we thinking things through; or is there an ulterior motive that led to the design of this argument? So, what would happen were Marlon Kuylen to resign as Senior Vice President, and then LOSE in the election to Ruperto Vicente? Would not there then be a “gap” in the Executive still needing to be filled? And what then? Would Vicente, as the new President, need to appoint someone else to fill the Senior Vice President post vacated by Kuylen? And who would that person be, pray? Perhaps someone to whom Vicente has promised an appointment in return for hatching this scheme?

Oh, what a tangled web we weave…!